Turf, also known as War Games Map_Set/: 409-3,[1] is a multiplayer map that was added for Halo 2 as part of the Killtacular Pack.

Turf is actually very small, but has a large appearance. It is a small city block, complete with convenience stores, garages, and a broken down Scarab. The presence of the Scarab suggests that it is part of the Old Mombasa featured in the campaign level, Outskirts. It also shows the bridge you must cross in Metropolis, and in the background is the Space Elevator.

There are numerous large, blue crates on Turf. Two of them have the number "0" written on them and contain flammable solid. These crates have a warning on the back, as opposed to a bar code number. Another crate has a "2" on it, and is the only other kind of crate besides "0" to have a warning instead of a bar code. This crate contains toxic materials. Another two crates have a "3" on them. These ones contains compressed oxygen, and have a bar code on the back: 8180 5213 9073 2807 7972. Two other crates, with a "4" on them, contain plutonium, a radioactive material, and have the same bar code on the back. The last crate, with an "8" on it, contains flammable solids, but probably not the same solids as the "0" crates, as it has a different number.

Turf is a fantastic map for ambushes. There are many boxes and crates littering the map; these can be used for cover and to lie in wait for opponents. Many game variants, especially those that are objective based involve a defensive role. The vast amount of strategic cover in this map makes it especially easy for successive defensive and flanking maneuvers.

Another key in dominating the map is to take over the large "L" shaped section of the map typically referred to as the courtyard, or the street. This is most commonly achieved through extensive use of the Sniper Rifle and players to cover the person sniping. The other key factor is controlling the Noob Combos. This allows players to easily control the large and small sections of the map, although the noob combo is most effective in medium range encounters which are abundant in Turf.

There are two large beams on the buildings on the street. When hit with a melee attack, these beams can fall and serve as a convenient walkway.

There is a way to get to the roofs of the buildings next to the medic hut. To do this, jump on the ledge that is to the side of the medic hut. There will be on the wall black knobs that stick out a bit, just enough for you to jump on them. Jump first on the one that has no awning on top of it. Then jump to the awning that is next to it. You can then jump from there up unto the top of the back wall behind the medic place, and from there run along the tops of the buildings towards where the Warthog spawns. This is a very useful spot if you have the some combination of Rockets, Snipers, and Battle Rifle. But watch out, if you're not careful and the other team has either the rockets or snipers its not too hard to take you down. This spot is an excellent strategical position for the game type Zombie.

A handy and ever so useful Shotgun appears right next to where the Warthog spawns. But the Shotty comes at a price, the Sniper Rifle lays on a higher elevation exactly opposite of its spawn point and thus makes the Shotgun wielder easy to attack. It is also close to the Brute Shots, which can and will ruin the close range specialist's day if a foe grabs one. And finally, it is placed right next to a destroyable object, the Warthog.

By the fallen Scarab, is a the Brute Plasma Rifle. Amazing when combined with a SMG, even a new player wielding it is dangerous due to the rate of fire and pure power the weapon packs. It is very effective overall on this map, it can force Snipers to un-zoom, take down enemies easily at medium and close range. And if the SMG wont kill the target, a swift melee attack will end their hindrance of you after they have taken only a few shots from the Brute's weapon.

A view of the Scarab on Turf. 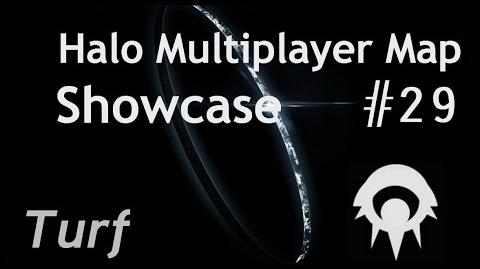