On the surface of Installation 04, in and around the control room.

Two Betrayals is the eighth campaign level of Halo: Combat Evolved. It is set in the same location as Assault on the Control Room, but this time John-117 travels in the opposite direction. The objective is to destroy three Phase Pulse Generators while fighting three other factions of enemies striving towards everyone else's destruction.

The Master Chief, after teleporting back to the Control Room, proceeds to activate Installation 04. However, Cortana, who after spending twelve hours in the control room has discovered Halo’s true purpose, stops him just in time. After stealing the Activation Index, she tells the Chief that Halo will wipe out all life in the galaxy, and turns the Chief against the Monitor. Spark sends Sentinels to take the Spartan's head, and the AI inside his helmet. After destroying the Sentinels in the Control Room, Cortana tells the Chief to destroy three Phase Pulse Generators to buy some time, in case the Monitor and his Sentinels find a way to activate Halo's firing systems without the index. While Cortana tries to locate the Pillar of Autumn's crash site, the Master Chief must hijack a Covenant Banshee and set out to destroy the generators. After destroying the third pulse generator, Cortana teleports the Master Chief to a Covenant cruiser: the Truth and Reconciliation. There the level Keyes begins.

Long shot of the Control Room. Master Chief and 343 Guilty Spark teleport in, obviously in the middle of a conversation, explaining something about the Flood.

Master Chief pauses as though sensing something is not quite right.

Master Chief and 343 Guilty Spark move up to the main control panel.

Master Chief takes the Index, and puts it into a slot on the console. Lights and holograms appear, but then fade.

Cortana suddenly appears over the console.

There is a flash of light, and 343 Guilty Spark is thrown back, and down to the ground.

Master Chief hesitates, and then turns to 343 Guilty Spark.

Four Sentinels float up behind 343 Guilty Spark, their beams aimed menacingly on the Chief.

Master Chief looks around at the Sentinels, and backs towards the panel. He takes Cortana's disk out of the console, and inserts it into his helmet.

343 Guilty Spark teleports away, and his Sentinels attack

After the Sentinels are destroyed:

The Gun Pointed at the Head of the UniverseEdit

Once outside, into the canyon

Once down to ground level:

Once in the Banshee:

Once you reach the room the generator is in:

After the generator is neutralized:

After going back outside, to the canyon:

Once onto the bridge in the middle of this canyon:

Once in the canyon with the 2nd pulse generator in it:

If you continue on to toward the 3rd canyon, before destroying the 2nd pulse generator:

After you destroy the 2nd generator:

Once you reach the tunnel leading to the 3rd canyon:

Once you enter the third canyon:

The Chief fights through an armada of both Flood and Covenant with supporting vehicles. After you destroy the final generator

Master Chief is teleported away. Fades to black. 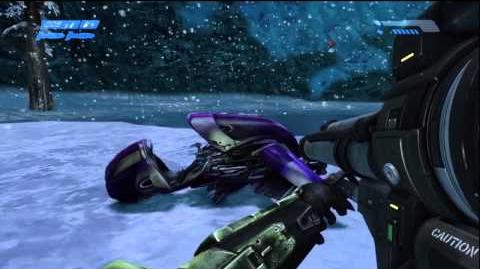 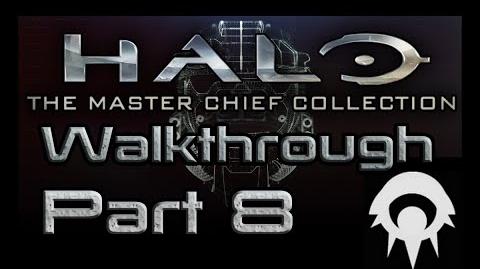