Fused when activated, explodes 3 seconds after hitting a surface.

“A holy Flare to light the Journey!”
— Anonymous Unggoy

The Type-1 Antipersonnel grenade,[3] more commonly known as the Plasma grenade, also known as the Sticky grenade in multiplayer terminology, is a Covenant anti-personnel weapon that explodes a short time after coming to rest.

The Type-1 Antipersonnel grenade is a dangerous hand thrown weapon utilized by Covenant forces, typically used by Unggoy, Sangheili, and Jiralhanae soldiers. The Type-1 Plasma grenade is a spherical explosive composed of an unknown material and contains a small plasma generator[2] and other sophisticated internal mechanisms. The grenade itself, in terms of design and operation, is straight forward; the activation "switch" is located on the orange colored area of the grenade. Above the activation pad is a Forerunner glyph; these glyphs featured on plasma grenades are known to change with each new model and are believed to be based upon the time of manufacturing and Covenant religious rituals. Using technology that is barely understood, even by the Covenant, the Type-1 Plasma grenade is employed as both a thrown anti-infantry and anti-vehicle weapon.

When primed, the Type-1 Plasma grenade starts venting its coolant[2] ensuring that the grenade does not stick to the individual who primed it. When thrown, the gaseous plasma begins to ionize to a degree such that if it comes into contact with a vehicle or individual, the plasma will start to burn into the surface and adhere to it, the venting coolant will cause the small plasma generator inside to destabilize and will in turn cause the grenade to detonate.[2] The grenade contains some type of sophisticated internal mechanism that allows it to distinguish between targets and the local environment; it will stick to a soldier or vehicle, but not to a tree or wall. Also, the grenade will not differentiate between friend or foe, or between targets that are alive or dead. Once something has been stuck with a plasma grenade, there is essentially no way to remove it. Only devices like an advanced electromagnetic shield can temporarily disable the internal adhesion mechanism, although this technology is sparse and only issued to special forces of both the UNSC and Covenant.

After adhering to a target, or otherwise coming to rest, a three-second fuse is engaged.[4] Detonation is first visible as a flash of white-blue light and the detonation zone is instantly subjected to the extreme temperatures of superheated plasma. Anything caught within ground zero, be it flesh, metal, or otherwise, is instantly vaporized. As there is no electromagnetic field to contain the plasma, it begins to deionize and cool very quickly. Thermal expansion causes the heat of the explosion to fan outward and upward, subjecting an area of up to forty feet away to intense temperatures until the resulting flames cool and are extinguished. After the initial explosion, the area of the detonation becomes ionized with negatively and positively charged particles which will cause striking electrical filaments to be visible for a short period of time.

The sheer destructive power the plasma grenade deals to any living creature within its vicinity is extreme; when a plasma grenade detonates on or near a target, it is subjected to extreme temperatures, killing anything within a 13 feet radius instantly;[5] damage to the body is extreme, as the heat flash vaporizes the bodies internal fluids and burns flesh and bone to an unrecognizable charred state. The concussion wave released by the grenade will also cause additional damage to anything within the kill radius. Any living being outside of the kill zone may sustain heat damage as well, as non-heat resistant clothing or flammable material may be ignited by the heat released from a detonating plasma grenade. The concussive force released by the grenade can also harm or disorient anything just outside the kill radius and can also be affected by the flames released from the grenade - a person can also receive injuries from objects being ejected out of the kill zone at high speeds as a result of a plasma grenade detonating.

The ability of the Plasma grenade to stick to its target is extremely useful when encountering moving targets that could easily evade other explosive devices. This adhesive property allows the Plasma grenade to function as both an anti-infantry and anti-vehicle weapon, where a stuck grenade can take down light vehicles and cause moderate damage to heavier ones. The explosive damage the Plasma grenade releases is also effective at destroying objects not sensitive to the heat released by one, and can also serve as an effective support weapon as well. Plasma grenades are also effective at disrupting electronics and shielding when they detonate.[6] The plasma grenade is known to be used by the lesser races of the Covenant as an effective suicidal weapon, a tactic most commonly used by mortally wounded or psychologically unstable Unggoy who will attach primed grenades to their bodies before hurling themselves at their enemies. Against UNSC forces the Plasma grenade is an effective psychological weapon due to the various consequences the grenade brings to anyone in its path. Its destructive properties can also leave terrible psychological effects on a person who has witnessed one detonate on a fellow soldier and seeing the destructive damage it has done.[7]

The Plasma grenade has a three-second fuse that the Human equivalent lacks. Therefore, if the Plasma grenade does not stick to the target, the target will then have ample time to evade the explosion. Sticking a Plasma grenade to enemy infantry can be a gamble. As the target stuck with the grenade will have three seconds to chase down the opposite opponent and kill them as well.

The Plasma grenade first appears in Halo: Combat Evolved and is the Covenant equivalent of the Fragmentation grenade. The grenade's appearance is a light blue colored sphere with a Forerunner glyph in the center. The grenade is very powerful with the ability to stick to both vehicles and infantry and is usable in both Campaign and Multiplayer.

A study of the Plasma grenade.

A study of the Plasma grenade when primed.

The Plasma grenade as seen in Halo: Combat Evolved. 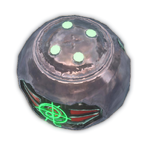 The Plasma grenade as seen in the Halo: Reach Beta.

A Suicidal Unggoy charging at his foes.

A Sangheili throws a Plasma grenade at oncoming Flood

The medal that appears when you stick someone in multiplayer.

A Unggoy with a Plasma grenade in Halo: Reach.

The grenade's explosion in Reach.

The Plasma grenade from Halo: Reach.