Were you looking for the original Plasma Rifle? 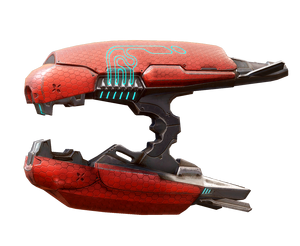 The Brute Plasma Rifle is a Covenant directed energy weapon that uses a superheated ionized gas called plasma instead of projectile ammunition. The weapon has a power output of 100−150 kV at 0.2–0.3 A (20–45 kW), and can fire 360–540 rounds per minute. Unlike the Plasma Pistol, the plasma rifle is capable of fully-automatic fire, thanks in part to its dual plasma collimator design. Placed atop one another, these collimators fire in a staggered pattern, taking the slow automatic fire of each individual collimator and combining them to allow a faster rate of fire. The Type-25 DER/J is considerably different than its Sangheili-issued counterpart. Unlike standard plasma rifles, the Jiralhanae variant fires a weaker bolt, identified by the bolts' red hue. The weapon compensates for this weakness with a higher rate of fire, as well as achieving better penetration and stronger kinetic impact than its Sangheili-issued counterpart. The only visual differences between the two weapons is that the Jiralhanae variant has a red casing. The top half of the Brute Plasma Rifle is also longer towards the back end than its Sangheili counterpart, which allows for a more comfortable grip by Brutes. So far, this variant has only been found in the hands of the Brutes and a small number of other Covenant species (such as the Drones) who work directly with them. Even now the weapon has only been sighted since the Brutes have begun a return to front-line combat.[2]

Against infantry, the lethality of the Jiralhanae Variant of the Type-25 DER is considerably increased over the standard model due to its higher rate of fire at close range. Injuries inflicted to a victim are severe third-degree burns, though this type of injury causes the wound to be cauterized instantly. Body fluids would be subjected to flash vaporization, inducing a strain or a shock on the body, and fluids trapped in organs or arteries subjected to rapid expansion from the heat could cause ruptures and additional damage to the target. Near misses can also cause injury, as they produce severe burns to nearby areas.  This can also cause trauma or heat stroke due to the extreme temperatures of the plasma bolt. Should the plasma impact an object, the impact can cause splash damage creating debris that may come into contact with a target, with a crippling or lethal effect. Generally, two hits from either a Plasma Pistol or Plasma Rifle will kill a light or non-armored target. Like its counterpart, over-extended periods of firing can overheat the weapon, causing it to become unusable for a short period of time.

The Type-25 DER/J is a close to medium range weapon, and as such can inflict very high damage at short range. The Jiralhanae variant benefits from a higher rate of fire, doubling the rifle's efficiency - this higher discharge rate allows for higher velocity, increasing the kinetic impact. The Type-25 DER/J can easily kill lightly- or unarmored targets with two strikes, while against heavily armored targets the Type-25 Jiralhanae Variant can inflict double the damage of the standard Type-25 DER.  Sufficient numbers of infantry equipped with Type-25 Rifles can halt an enemy advance with its ability to deliver suppressive fire.  This tactic is also reflected in the Covenant's combat doctrine:  destroy enemy morale with harassing fire and exposure to the alien-ness of their infantry. SPARTAN-IIs can dual-wield plasma rifles, doubling their efficiency in close quarter combat situations. The plasma rifle's high-velocity bolt coupled with its kinetic impact can temporarily stun even a SPARTAN-II.

The Type-25 DER/J is even more prone to overheating than its standard counterpart after expending four percent of its battery[3] because of the rapid cycling, loading, ignition, and release phases; to prevent the weapon from being damaged, the Type-25 DER temporarily shuts down and opens heating vents to allow the excess heat to dissipate before the weapon reactivates. When compared, a single bolt from the Jiralhanae variant of the Type-25 DER is considerably weaker than a bolt from the Sangheili version, this is because in order to achieve a higher rate of fire the temperature of the plasma must be reduced in order to achieve a higher discharge rate without overheating the weapon after a few shots. At 10% charge level, the plasma rifle will begin to misfire, perhaps is due to the battery's inability to deliver enough energy to start and complete the ignition and release phase of operation, hampering the operator's use of the weapon. Human military experts and scientists do not understand how Covenant plasma weapons work, or how they are recharged; as such, when the battery is depleted, the rifle must be discarded or replaced.

The Type-25 DER/J is not suited for long range combat, due to several distinct properties of the weapons operation. The first is the rate of thermal expansion which is determined by the rate of the bloom of the bolt, blooming is the result of plasma breakdown in the air at energy densities of around a megajoule per cubic centimeter. This effect causes the plasma to defocus and disperse energy into the atmosphere. It can be more severe if there is fog, smoke, or dust in the air. As the bolt is accelerated away from the "barrel" of the weapon the plasma begins to decay as a result of the weakening magnetic field. Speed also factors in to this, the faster the bolt is accelerated, the farther the bolt will travel before the temperature of plasma begins to decay and the magnetic field becomes unstable and finally dissipates. As the bolt loses velocity it also loses kinetic damage as it travels longer distances.

Changes from Halo 2 to Halo 3: ODSTEdit

In the warzone games there are different variations on the Plasma Rifle which are the Brute Plasma Rifle, Sorrow of Teash, and the Scale of Soirapt

A study of the Brute Plasma Rifle.

A study of the Brute Plasma Rifles projectile.

Brute Plasma Rifle as it appears in Halo 2.

Render of the Brute plasma rifle in Halo 3: ODST.

Render of the Brute Plasma Rifle in Halo 2: Anniversary's campaign.

A render of the Brute Plasma Rifle in Halo 5: Guardians.

Render of the Brute Plasma Rifle in Halo 5: Guardians's multiplayer.
Add a photo to this gallery

The Brute Plasma Rifle, as seen in Halo 3: ODST.

A Brute Plasma Rifle with the incorrect texture applied to it, created through the Weapon Pad REQ Glitch.
Add a photo to this gallery

The Brute Plasma Rifle's uncommon REQ card, included in the Memories of Reach update.
Add a photo to this gallery

Retrieved from "https://halo.fandom.com/wiki/Type-25_Directed_Energy_Rifle/Jiralhanae_variant?oldid=1813476"
Community content is available under CC-BY-SA unless otherwise noted.