The Brute Chopper is a heavily-armored, dual-wheeled assault vehicle, kept aloft by a gravity array under the seat at the rear and a massive double wheel in the front (which supports the vehicle's balance by its axis of gravity). The Chopper is best described as an "anti-anything" vehicle. Its powerful 35mm auto-cannons can take down most light ground vehicles with ease, and the large blades on the front can instantly destroy any light armored vehicle by ramming into it.

It is sometimes used in conjunction with a Ghost, due to the Chopper's superior firepower and the Ghost's superior maneuverability. The Type-25 RAV was rarely used before the Great Schism, as the Jiralhanae were not actively deployed on most battlefields. With the Jiralhanae's resurgence onto the battle lines as replacements for the Sangheili, their species' vehicles became more prevalent.

The very first choppers were built by an engineer named Lighter Than Some, as a misguided peace offering towards the human population of Harvest. Ironically, the pacifistic Huragok built them in imitation of the colonists' mechanized JOTUN plows, intending them to be used in the same way as their human-made counterparts, using parts from a Covenant dropship damaged when he and the Unggoy Dadab were brought aboard and two of the troop bays trapezoidal support ribs each. However, when he presented the four prototypes to the crew of the Rapid Conversion, a young Captain Tartarus misinterpreted the claim "for the aliens" to be for use against the humans. Having feared that Chieftain Maccabeus would kill him for the Huragok's actions, Dadab, the only one who could communicate with Lighter Than Some, went along with the misconception, utilizing them as vehicles of war. The Jiralhanae customized these prototypes by mounting pairs of Spikers to their bodies. As time progressed, the armament mounted on the vehicle was replaced with two pairs of powerful 35mm autocannons crudely welded to the front with wires leading to the handles so the drivers could fire as they drove, and the replacement of blades with grinding wheels.

The Type-25 Rapid Assault Vehicle is a heavily armored vehicle, though it is surprisingly fast. Its primary assets lay in its capability to temporarily accelerate to twice its speed through rocket thrusters and its armament.

In the prow is a massively swelled cyclical engine array, which appears to be the source of the vehicle's power. Directly connected to it at the back is a small, exposed cockpit that provides the rider little protection from combat fire. The only defense is offered by the sheer bulk of the wheels, which are large enough to protect a pilot from frontal fire. The engine is also fitted with a ramming targe, allowing the pilot to shred anyone in its path. The blades on the wheel are strong enough to take down and cut through any vehicle with the boost except large ones like the Wraith, Scorpion tank, and Elephant. Even if it does not destroy the vehicle, a boosted impact may inflict severe damage to the target.

When activated, the vehicle moves around by the use of two massive wheels on the front of the vehicle. To turn, the whole frontal portion of the vehicle rotates to the left or right. However, the pilot's seat is kept aloft by anti-gravity technology similar to that of the Ghost. The anti-gravity technology makes the Chopper difficult to be flipped by anything, as the wheels turn instantly when they are on their sides, which keep the driver afloat with the thrusters in the rear.

The autocannons can damage all but the most heavily armored vehicles with relative ease, its powerful impact sending targets reeling. It is similarly effective against enemy infantry, killing more fragile enemies, such as Yanme'e with a single shot.

The Chopper's heavily armored chassis and boost allow it to destroy small or medium-sized vehicles (including other Choppers) through ramming them. However, ramming another Chopper head-on risks destroying both vehicles. With proper skill, it is possible to destroy Banshees and Hornets while in the air. It is a misconception that the Chopper would have any difficulties in performing sharp turns as it is the fastest vehicle to execute such a maneuver; this makes getting behind a Chopper a very difficult task.

Choppers can fit through many doors; on the the Ark, the Chopper can be taken through to the end of the level, making many of the battles significantly easier.

Choppers lack the ability to strafe; they can only turn while moving forward or backward. Other factors, like a wide turn radius add to their overall relative lack of maneuverability, as compared with Ghosts and even Warthogs, among others. The rounds of the cannons fly at a relatively slow velocity and have a tendency to arc; at longer ranges it is necessary to lead targets and aim high to compensate. The auto-cannons shoot nearly straight out of the front of the vehicle, so it can become difficult to destroy more maneuverable vehicle targets or fast moving opponents. Chopper drivers are extremely vulnerable from the back, which offers almost no shielding from enemy fire. The lack of maneuverability and low speed make the Chopper a hard vehicle to drive for inexperienced players. The boost function on a Chopper is also limited in the amount of time it can be used, and requires a rest period before it can be used again. Lastly, the Chopper has a very slow reverse speed, making it difficult to retreat.

A disadvantage which does not appear in-game is the vehicle's travel range. The Chopper can drive a total of 271 km (169 miles) before it needs to refuel, which is just over a third of the range of the Warthog and Scorpion, and close to a quarter the range of a Ghost.[4]

The Chopper is a unique unit for the Jiralhanae Army Commander, replacing the Ghost. It has three upgrades:

Concept art of the Chopper with Jiralhanae.

One of the first appearances of the Chopper.

A render of the vehicle in Halo 3.

A Jiralhanae driving a Chopper.

A glitch in which one will ride a destroyed Chopper.

Choppers as they appear in Halo Wars. 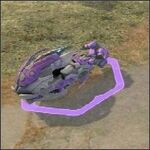 The Halo Wars version of the Chopper.

The Mega Bloks set of the Chopper.

The antigravity part underneath the seating.

A Chopper as depicted in Halo: Escalation.
Add a photo to this gallery

Retrieved from "https://halo.fandom.com/wiki/Type-25_Rapid_Assault_Vehicle?oldid=1801614"
Community content is available under CC-BY-SA unless otherwise noted.