The Type-26 Anti-Infantry Stationary Gun[1], abbreviated as Type-26 ASG and known as the Shade, is the Covenant's standard stationary gun turret and anti-infantry weapons platform.

The Shade is a Covenant stationary gun, commonly operated by Unggoy. The Shade gun fires two bolts of (three in Halo: Combat Evolved) slow moving, high powered plasma encased in magnetic fields. The accuracy of a Shade's weapon is fairly low, as the bolts of plasma fired can hit anywhere within the aiming reticule.

Since the Shade is designed with infantry combat in mind, it is highly effective against Unggoy and Kig-yar, and has exhibited limited effectiveness against Sangheili (especially at dropping their shields). However, due to their high intelligence, Sangheili will often find cover and escape the Shade's range of fire. On this same note, the bolts fired lack the required punch to damage Mgalekgolo, whose armor and combat shield can withstand most Covenant and UNSC small firearms, causing the plasma bolts to have little to no effect on them.

The Shade offers a wide field of fire and a 360 degree traversal mount. The Covenant use the Shade's field of fire to their advantage and place them at strategic points where they can do the most damage. It is highly effective at combating light infantry, has shown good defense against light vehicles such as the Ghost, and in desperate situations, can serve as anti-aircraft defense, requiring only a few direct hits to destroy a Banshee.

As with its recognizable human counterpart, the Shade is very effective against both enemy ground forces and light vehicles. Some of its advantages over its human counterpart are that the plasma bolts are accurate and effective at longer distances and it is easier to see where shots are actually going than it is with the HMG’s tracer rounds.

As with the human counterpart, the player will be exposed to enemy fire. While it is useful against enemies in light vehicles, this is not a weapon of choice when facing an enemy armored vehicle. Also, as is the case with the HMG, players are unprotected from the rear, although this is lessened by the ability to completely rotate the turret. Additionally, the Halo 3's version of the Shade has an extremely slow turning rate, making it a detriment to the user.

There are four models encountered so far in the Halo universe.

The Shade in Halo: Combat Evolved and Halo Wars consists of a sturdy base of three legs and a floating, mobile, turret-like seat with control systems for its "nozzle".

The Shade returned in Halo 2, and is referred to as the Shielded Plasma Cannon.[citation needed] Similar to the ones in Halo: Combat Evolved, this turret fires slow moving red plasma bolts. To protect the gunner, this turret is equipped with an energy shield, similar to the Kig-yar Point Defense Gauntlet. These turrets are featured at the beginning of Template:Levelname.

The turret on the Shadow is very similar in appearance to the Shade in Halo: Combat Evolved. In addition, these turrets seem to be more powerful than the standard Shade in Halo 2, and offer more protection as they are fixed to the armored personnel carrier and, as such, are mobile. The rate of fire is also considerably faster by as much as three times.

The Shade returned in Halo 3 and had major visual and technical updates from its predecessors; the Shade now is in the shape of a ball-turret, has a higher rate of fire, and provides excellent front and side protection for the gunner. Like all Shades that have appeared in previous games, it is elevated on a small gravity lift that hovers the turret in the air, and so has a full 360 degree field of view.

The Shades are not found in the hub world in the game, but are often present during campaign missions set earlier. Many are set up in the Uplift Nature Reserve, where the Prophet of Regret's Assault Carrier had formerly been docked. Others can be found in the city during Mickey's journey through the city center to link up with Dutch, again on the rooftops of the New Mombasa Police Department Headquarters, and during the ODST's withdraw across the Coastal Highway.[2] It does not appear on any Firefight map.

A close up of a Shade's Plasma bolt in mid-flight. 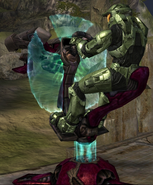 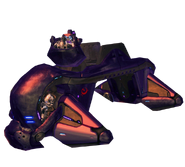 A Shade on top of a Shadow.
Add a photo to this gallery

Retrieved from "https://halo.fandom.com/wiki/Type-26_Anti-Infantry_Stationary_Gun?oldid=1025423"
Community content is available under CC-BY-SA unless otherwise noted.