This page is about the Space Banshee featured in Halo: Reach. For other uses of the term "Banshee," see its disambiguation page

The Type-27 Exoatmospheric Multi-role Fighter,[1] informally known as the Space Banshee, Banshee Interceptor, and Banshee Fighter, is the Covenant's standard space interceptor support craft.[2] It is a vacuum-sealed variant of the Type-26 Ground Support Aircraft that is designed for exoatmospheric combat.[3]

The Type-27 XMF is similar in appearance and design to the Type-26 "Banshee" GSA. It is equipped with two forward-swept wings, sporting two Class-2 plasma cannons, which are elongated in comparison to those of the normal model, and a Class-2 fuel rod cannon. The primary cannons seem to be more powerful than their ground-based counterpart. Unlike the standard Banshee, the Type-27 features a vacuum-sealed cockpit which makes it suitable for space battles. The forward-swept wings are suited for dogfights in space.

The weapons use Superheated Plasma like most Covenant weaponry, but unlike its cousin the Type-26 Banshee, the elongated Class-2 Energy Gun gives the plasma a little more kick which makes it stronger especially in dogfights. The vacuum-sealed cockpit makes it suitable for space battles. The Class-2 fuel rod cannon is the same as the Type-26 Banshee copying its strengths and weaknesses.

The Type-27 XMF assisted the Covenant fleet in attacking the UNSC defense fleets and orbital stations over Reach during the Fall of Reach, particularly during Operation: UPPERCUT. There, they were used in conjunction with the Covenant's more powerful Type-31 Seraph-class XMFs.[3]

Multiple view renders of the T-27 with or without its canopy open.

A groups of T-27 preparing to launch from the Corvette.

A T-27 being deployed from a Corvette. 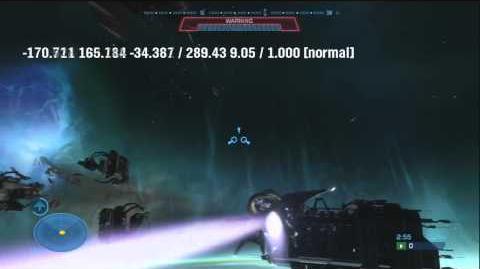