This article is about original Needler, first seen in Halo: Combat Evolved. For more uses of the term Needler, see its disambiguation page.

“It’s about as close to a fire-and-forget small arm as we're likely to ever see, and it ain’t ours. This is why we’re losing.”
— Anonymous serviceman

The Type-33 Guided Munitions Launcher,[4][5] more commonly known as the Needler, is a Covenant anti-infantry weapon. It is used by Sangheili, Unggoy, Skirmishers, Yanme'e, and Kig-Yar.

The Needler is one of the few Covenant weapons which isn't based on reverse-engineered Forerunner technology.[3] The Needler's top plate has 14 holes which the needles protrude out of. When the trigger is pulled, the needle is fed from the top into the barrel and fired. The needles home into their target and impale it. Several seconds afterwards, the needles detonate. A single needle detonation does not cause significant damage, but if enough needles make it into the target at once, the needles will supercombine, synchronizing their explosions for massive damage.

Razor-sharp crystalline projectiles are fired from this elaborately designed Covenant weapon; it is widely believed that these needles use heat or organic signatures to home in on targets, and may have some relation to the Plasma grenade and the Plasma Pistol's charged shots, which also react to living tissue and Sentinel mechanics. The needles appear to have some sort of "identify-friend/foe" function, as they will home in on hostile targets but not allies of the wielder. Once fired, a needle will seek its target until impact, entering the victim's body violently. After several seconds, the contents of the crystalline shard will detonate; injuries inflicted from the exploding shard are gruesome, as microscopic pieces of shrapnel can become embedded in tissue.

Needlers cause two types of damage: penetration, injuries caused by the impact of the crystalline needles, and explosive, explosion of needles wedged in the body and splash damage to surrounding units. A crystalline projectile can cause fatal damage to its victim — a single shard can cause internal bleeding or strike a vital organ, with untreated wounds resulting in death. Depending on the impact area and angle, several crystalline shards can cause amputation of limbs, and impacts to the chest are in most cases always fatal; the explosive properties can easily crack ribs, damage the lungs or heart, and cause severe tissue damage that can be very difficult to repair. For unknown reasons needles do not always explode upon impact with living tissue.

The crystalline projectile appears to contain some type of gas or energy, which is released upon impact with a target; after seven or more needles have struck a target in the same general area, the needles will react to each other, triggering an explosion that kills the victim instantly. When either a single or multiple needles detonate, they release crystal shrapnel, which can embed itself in nearby organisms; thus, friendly fire is often a necessary consideration in close quarters combat.

The Type-33, unlike other Covenant weapons, allows the user to aim at the closest target, fire and move on, as its homing ability allows its user to avoid being exposed to enemy fire while inflicting his own. The more needle shards that impact the target, the higher degree of damage it will do to the target, seven or more needle shards detonating at the same place will cause a massive explosion that will cause splash damage and cause shrapnel damage, which can also cause nearby explosives to detonate, giving the enemy another reason to run. The projectiles ricochet when they hit rigid surfaces at oblique angles and retain sufficient velocity, making dodging them a challenging feat.

While the Type-33 GML is incredibly effective against most infantry, it is much less effective against armored targets, such as vehicles. Due to their size, the crystalline projectiles are slow and lose velocity very quickly, limiting range. It is for this reason that they often fail to penetrate armor; the needles usually only explode when they contact organic tissue, but will also shatter after traveling a certain distance without striking a target- limiting the weapon to short-range. The Needler also has difficulty penetrating hard surfaces, being observed to harmlessly shatter against the pauldrons of the MJOLNIR powered assault armor/Mark IV in combat. The Needler is also ineffective against linear energy fields, like the Point Defense Gauntlets carried by Kig-Yar, or stationary energy shields.

In order for the tracking ability to be most effective the targeting reticle on the users heads up display must acquire the target, or if no targeting reticle is available the user must judge how close he must be to a target in order to effectively use the weapon. While the homing ability is incredibly useful the crystalline shard cannot track a target relentlessly, turning at a certain angle will cause the projectile to simply keep flying and miss the target completely, fast turns at certain angles will also cause the projectile to lose the target and travel onward.

Another disadvantage would be the Type-33 GML's inconsistent damage. Seven needles are required to super-combine, but individually, each needle has very little effect.

Finally, there is a minor disadvantage in that the Needler is unsuited to setting off explosive devices like Fusion coils, often requiring much of the magazine to destroy one.

Changes from Halo 2 to Halo 3

Changes from Halo 3 to Halo 3: ODST

Changes from Halo 3 and Halo 3: ODST to Halo: Reach

The Needler is best used at close to medium range against groups of enemies in the open. The wielder should be familiar with the amount of needles necessary to make the shots connect, and have a fundamental understanding of the weapon's strengths and weaknesses.

Concept art of the Needler for Halo: Combat Evolved.

A blueprint of the Needler.

A side profile of the Halo: Combat Evolved Needler.

Front and back view of the Needler.

The Needler in first-person.

Needlers and their ammunition.

A side profile of the Halo 2 Needler.

A side profile of the Halo 3 Needler.

An angular view of the Needler.

Another shot of the Needler.

The Needler's shard in mid-flight.

The Needler in first-person.

A side profile of the Halo: Reach Multiplayer Beta Needler.

A first-person view of the Needler during the Halo: Reach Multiplayer Beta.

A side profile of the Halo: Reach Needler.

The Needler in first-person view on Halo: Reach.

Render of the Needler for Halo 4.

The Halo 4 Needler in first-person view.

Firing the Needler from first-person view in Halo 4.

A blueprint of the Needler in Halo 4.

The Needler from the Halo 4 Covenant weapons video.

Kig-Yar Minors attacking with a Needler in Halo: Spartan Assault. 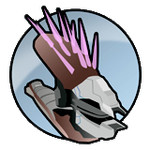 The Needler seen on the achievement "A Spoonful of Blamite."

The Needler as seen in Halo 2: Anniversary.