This article is about the anti-aircraft gun featured in Halo: Reach. For the AA gun in Halo 3, see [[Type-27 Anti-Aircraft Cannon]].

The Type-38 Anti-Aircraft Cannon, nicknamed the Tyrant, is a type of anti-aircraft emplacement used by the Covenant Empire. It fires extremely powerful bolts of superheated plasma at a high velocity.[2]

The Type-38 Anti-Aircraft Cannon was used during the Fall of Reach. It differs considerably from the sleeker, more streamlined Mantis seen during the Battle of Earth and the Battle of Installation 00. The T38 is significantly heavier in construction and is able to fire three bolts in a rapid succession. It has a small command center inside it with slopes leading to the second level of the structure's base. The gun's vulnerable power core is encased in the center. Each time the cannon fires, a bolt of plasma is generated by the core and fired up into the gun.[2]

There are two ways to destroy the T38-AAC. The first way is to enter its interior and destroy the core, which will cause the gun to explode. Once the energy shield guarding the core is destroyed, it only takes a single grenade to be destroyed. The second way is to simply fire at the cannon with any weapon to destroy it, although heavy vehicles like the Scorpion or Wraith are the easiest and fastest way to do so. This may be convenient if the player does not want to bother defeating the large amounts of infantry that are almost always guarding it.

Type-38 "Tyrant" Anti-Aircraft Cannon with some infantry guarding it.

A side view of the "Tyrant" AA Plasma Cannon.

A Tyrant on the ruins of Airview Base.

A Tyrant's explosion is extremely visible.

A Hunter defends a Tyrant. 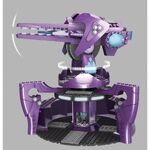