Covenant, then Swords of Sanghelios and Covenant Loyalists

Used as a heavy support weapons in ground based combat, it provides a rapid stream of powerful plasma bolts, to suppress enemy movements and offensive actions. The cannon is basically a mobile support weapon and as such offers no protection for the operator which is usually a Heavy Grunt, although it can occasionally be used by an Elite Major. The gunner is completely exposed to incoming enemy fire, so a well covered emplacement position would be a desired place for prolonged use, especially if under constant enemy fire. This separates it from the Shade and Shielded Plasma Cannon, as both these offer some measure of protection for their operator, but are, however, not man-portable. Unlike the similar Type-52 Directed Energy Support Weapon, the Type-42 does not include the shield-like protrusions on the crest of the barrel and appears very much like an elongated Plasma Rifle.

It is carried and operated in a similar fashion to the M247 GPMG made by the UNSC. In the portable form, it includes a two-part foldable mount that contacts the ground in the shape of a "V." It has an approximate 65 degree turn radius and 50 degree pitch. It fires plasma bolts similar to those of the Covenant Plasma Rifle, but at a much higher rate. A battery or plasma core is built into the tripod which allows the gun to be fired indefinitely.

Since the operator is completely exposed to fire, it is logical to kill the gunner, and not attempt to destroy the gun itself. The gunners are usually positioned low to the ground and as such can be difficult targets to hit. It is advised to attempt this from cover, since the sheer volume of fire the cannon can lay down is not to be underestimated. Once the operator is down, a well placed grenade or some other explosive should be used to put the cannon out of action temporarily (although fairly rare, another Grunt will operate the turret if the original gunner is killed).

The Halo 2-era Plasma Turret can't be detached but can be meleed or shot off using firearms. Also, the turret can be manned after it has been mounted by a Gunner Grunt.

On several missions, Gunner Grunts can sometimes be seen carrying a plasma turret over their shoulders as Marines do with the cut-down version of the M247 GP. The first time this is seen is on the mission Cairo Station when you get to the second Commons B-01. This behavior can also be witnessed in Hangar A-02. On Outskirts, Three Heavy Grunts are found manning plasma cannons in the tunnel, and on Gravemind, two Gunners are deployed at the start of the level to take out John-117. While on The Arbiter, a Special Ops Grunt is seen carrying a plasma turret over his shoulder, then deploying it and firing on the Heretics. 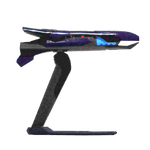 Render of the T-42 in Halo 2.
Add a photo to this gallery

Retrieved from "https://halo.fandom.com/wiki/Type-42_Directed_Energy_Support_Weapon?oldid=1794437"
Community content is available under CC-BY-SA unless otherwise noted.