Were you also looking for the human spacecraft, the UNSC prowler?

Explosives in general, as well as the Spartan Laser.

The Type-52 Infantry Support Vehicle,[2] abbreviated Type-52 ISV and also known as the Brute Prowler,[4] is a Covenant Loyalist ground vehicle used by the Jiralhanae, featured in Halo 3. The Prowler is the Jiralhanae equivalent of the UNSC's Warthog and the Covenant Spectre.

The Brute Prowler is the designation of the Loyalist's replacement for the Spectre from Halo 2, but this time, driven only by the Jiralhanae . The Prowler seems to hover on a gravity-assisted "sled," as the bottom incorporates a pair of metal runners with an anti-gravity projector running between them. A Plasma Turret is located at the front of the vehicle, the driver sits in the rear of the vehicle, and two passengers can make use of the jump seats on either side. It's aesthetically similar in its clear-cut, brutal nature to the Brute Chopper. The concept of its anti-gravitational propulsion is also similar to the Chopper's, but it differs by utilizing two dual engines rotating in opposite directions.

The automatic Plasma Turret is capable of 360 degree movement, making it extremely dangerous, as it allows the vehicle to target enemies regardless of which way the Prowler is facing. This makes it very difficult to ambush Prowlers, as a competent gunner will constantly check all directions for enemy movement. Like most other Jiralhanae vehicles, it is an effective battering ram. While the vehicle cannot strafe, it is capable of tilting from side to side.

The two side-mounted seats on either side of the Prowler turret housing increases the vehicle's deadliness. If the passengers are armed with powerful explosive weaponry, such as a Fuel Rod Gun or Rocket launcher, the Prowler can effectively take out large armored vehicles such as Scorpion or Wraith tanks. If the passengers decide to use automatic weapons such as a Plasma Rifle, they can complement the plasma turret and make for an extremely effective weapons platform for cutting down enemy infantry and suppressing light vehicles. It's also effective if passengers are armed with Maulers or Shotguns, as they can shoot any enemy that gets too close to the Prowler and prevent a potential boarding.

Unlike the Warthog and the older Spectre, the gunner does not stand up in the turret, but rather sits in a cavity in the center of the vehicle. The gunner's cavity covers the lower body, leaving only their upper back and head exposed. The gun is also in a more central location than the other two vehicles, providing even more protection. The driver also receives protection from being in the rear, with the entire bulk of the Prowler in front of him. However, the driver has limited protection from the sides. Unlike most other Covenant vehicles, the Prowler lacks a boost function, but is still fairly fast.

Unlike the Warthog, which is prone to rollovers, the Prowler is incredibly stable, and like the Chopper, it is surprisingly hard to flip over. The Prowler can also fit one more passenger than the Warthog can, which lets the crew fight off hijackers with ease. The Prowler is more effective than the Warthog at splattering enemies, and can easily be used as a deadly battering ram. It is relatively quieter than the Warthog, and provides a smaller chance of giving enemies enough time to react and save themselves if you are attempting to splatter them. Additionally, it also possesses much more firepower when fully crewed than the M12 Light Reconnaissance Vehicle or Chopper, and it has a much larger field of fire. In the realm of performance, its strength is its great speed. The design of the Prowler makes it capable of flipping vehicles with ease. It also accelerates noticeably quickly in reverse.

A key advantage of the Prowler is its stability: one can throw it almost recklessly over jumps and cliffs that would be unsafe, unfeasible, or downright stupid in a Warthog or Spectre. This is mostly due to the "sleds" on the underside of the vehicle. When airborne, the two sleds will extend outward to either side, widening the surface area of the bottom of the vehicle, and therefore making it more likely that it will land in the proper position when it hits the ground. The sleds also seem to allow the Prowler a limited "glide" when making large jumps.

Although the Prowler has more firepower than the Chopper and the Ghost, its Plasma Turret has a low rate of fire and is less accurate; thus it is not as well suited for direct assaults and splattering. Though the Prowler is capable of splattering at minimal velocity, sometimes even being able to splatter enemy vehicles in head-on collisions (much like the Chopper), infantry will have an easy time avoiding the Prowler due to its slow speed and relatively poor handling. In addition, the driver is prone to approximately 270 degrees of fire, making the driver a much easier target for an experienced sniper compared to most other vehicles, which could ultimately leave the Prowler a sitting duck: a perfect target for a Rocket launcher. Or all personnel on the Prowler can be sniped, one by one.

If a charged Plasma Pistol bolt hits, or Power Drain(s) is close to, the Prowler, it could temporarily or permanently disable the Prowler. Or (worse case scenario) if there are several Power Drains, mulitiple charged plasma bolts, mulitples of both. The occupants can be picked off at close-, mid-, or long-range attacks. The Driver could be hit from behind if the gunner is distracted. On Sandtrap (in the depression), someone could snipe from far (in front or behind) or hijack the gunner from above (worse: while his/her shield are low). The passengers could be stuck by grenades or sniped as well.

The Prowler is a light recon vehicle, much like the Warthog. Replacing it on certain maps or based upon game settings is the only way to use it in multiplayer, however. It only appears in Campaign mode on the levels The Ark and The Covenant. It has moderate infantry support capabilities, as well as being able to transport four soldiers rapidly across a battlefield. With two Prowlers, an entire team of eight can travel together.

An in-game profile view render of the Brute Prowler.

The Prowler is seen here in action on Snowbound on a CTF game.

Two blue Sangheili on Sandtrap use the Prowler's heavy Plasma Turret to destroy another Prowler.

A red and a pink Sangheili on a Prowler on Sandtrap.

A Brute Prowler on the Ark.

A pack of Jiralhanae in a Prowler. 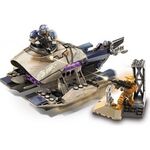