The Type-58 Ultra-Heavy Site Excavator/Embedded, also known as the Sbaolekgolo to the Covenant remnants or Harvester to the UNSC, is a gigantic six-legged vehicle first introduced in the Halo 4 Spartan Ops chapter Switchback. Similar to the Scarab, it is controlled by a crew of Sbaolekgolo worms and is used for mining operations.

Fireteam Crimson was sent to investigate the Harvester after the disappearance of Fireteam Switchback with nothing left but their IFF tags. Crimson disabled the Harvester, but the site was retaken sometime later by the Covenant. After finding out the true purpose of the vehicle (to find a Forerunner artifact), Crimson had to re-enable the device so Infinity could escape Requiem.

Model of the Harvester legs. 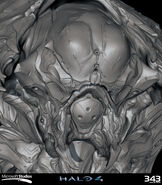 A close-up view of the Harvester's Cockpit

Retrieved from "https://halo.fandom.com/wiki/Type-58_Ultra-Heavy_Site_Excavator/Embedded?oldid=1794472"
Community content is available under CC-BY-SA unless otherwise noted.