The UH-144 Falcon[5] was a troop transport tilt-and-transverse-rotor helicopter in primary use by the UNSC Army.[2]

The Falcon first entered UNSC service in 2497 and was well recieved on inner colony worlds as a good, economical replacement for the Pelicans.[2] From there, it has seen its fair use over the course of the Human-Covenant war, as one of the UNSC Army's main air transport vehicles.[6][7]

The Falcon has seen through various theatres of war but it was used extensively by Noble Team during the Battle of Fumirole, providing air support[8] and in 2552 where they helped Noble with several missions on Reach including: Their investigation of the Visegrád Relay, the First Battle of Sword Base, the Battle of Viery, the beginning of Operation: UPPER CUT, the Raid on New Alexandria, the Evacuation of New Alexandria, and the Second Battle of Sword Base.

However, they were also used by the crew of the UNSC Pillar of Autumn, during the Battle of Installation 04, where they were deployed to the surface, following the crash-landing of their ship[9]. They were also deployed, during the Battle of Mombasa, by UNSC forces on Earth, in the waning days of the Human-Covenant war.[10] It is still currently in service since 2557.[6]

Two Falcons can transport a fully-equipped fireteam,[11] and provide overwhelming fire support in most weather conditions. The aircraft's crew consists of one pilot, two crewmen who may serve as door gunners, and three passengers.

Standard armament for a Falcon includes a chin-mounted M638 Autocannon[11], operated by the pilot and secondary weapons, fitted by crew's discretion on articulated, collapsible, turret arm-mounts. These choices include the MG460 Automatic Grenade Launcher or M247H Heavy Machine Gun.[2]

The Falcon differs between the campaign and multiplayer. In Campaign, the internal passenger bench is available for players to sit on, on top of the usable gunner seats. As well, the chin-mounted autocannon is usable by the pilot, and the grenade launcher variant is usable. The multiplayer version only allows passengers with the gunner seats and lacks the chin-mounted autocannon.

Early concept art for the Falcon.

A concept model of the Falcon.

Concept art of the Falcon, side view.

A few of the original renders, note the chin gun.

Another view of the Falcon. 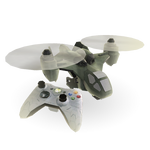 The first Falcon made by Mega Bloks

A covert Falcon made by Mega Bloks

A blue Falcon by Mega Bloks