“From Earth to the stars.”
— Advertisement[1]

In 2548, the Air Force garrison on Meridian would attempt to defend the colony when the Covenant attacked.[4]

During the Fall of Reach, "AMX" (Air Mobility Express) units assisted Noble Team. AMX-4 assisted at the Assault on Szurdok Ridge.[5] AMX-42 helped with evacuation efforts during the Raid on New Alexandria.[6]

During the Second Battle of Requiem, the Air Force assisted ground and naval forces. They cleared the airspace around Requiem with F-41s, when the UNSC Infinity arrived.[7]

It is likely that it is tasked with organizing aerial operations, conducting tactical strikes and bombing runs, providing close-air support for infantry forces, combat search and rescue, and transportation of UNSCDF personnel.

One of the only known piece of uniform used by the Air Force is the Pilot helmet, which is compatible with all other UNSC armor systems.[8]

Pilots utilize the Recon variant of M20 SMG, as well as its various attachments, as their personal defense weapon.[9]

After the Human-Covenant war, the Air Force utilized the Urban variant of the M290 Mongoose for security patrols.[10]

The Air Force utilized the GA-TL1 Longsword-class Interceptor up to at least 2557. As well, remaining Shortsword Bombers were given over to the Air Force in that year as reserves.[11] The Air Force also operates the F-41 Exoatmospheric Multirole Strike Fighter.[12] They also utilize the D79H-TC Pelican in the Post-war period.[13][note 1] Air Force rescue squads used the EV-44 Support VTOL.[14]

Air Force units use the MEP-PU-2550D/E Generator for power when they are out in the field.[15]

Halo 2 era pilots in a Pelican.

Another Halo 3 era pilot with a Hornet.

The Wombat, used by the UNSC Air Force. 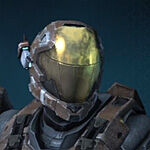 Atmospheric Longswords as seen in Halo: Reach. It is almost certain that they are used by the Air Force.