2552, entire vessel split in half. Bow crashed into Earth ocean, piloted by the Arbiter. Aft drifted toward Requiem with John-117 and Cortana. Completely destroyed after crashing onto Requiem in 2557.

The UNSC fleet suffered heavy casualties during the Covenant assault on Earth. By the time John-117 arrived from Installation 05 aboard the Prophet of Truth's Forerunner dreadnought, Forward Unto Dawn was one of the few ships that remained of the UNSC's defenses.

The ship was used by Fleet Admiral Terrence Hood as his flagship during the Battle of Tsavo. The Forward Unto Dawn and two other frigates were sent to destroy the grounded Dreadnought on the Portal, once the Spartan punched a hole in the enemy's local air defenses.[6]

The frigates and accompanying GA-TL1 Longsword-class interceptor fighter squadrons attacked the primary target at the conclusion of the Battle of Tsavo, though the MAC rounds from the frigates and missile bombardment from the fighters failed to make any impression on the Dreadnought. The Portal to the Ark was then activated and the Covenant fleet, including the Dreadnought, departed through it.[6]

“I'm giving the Brutes all I've got… but this is a heavy-weight fight! The Dawn's only got the tonnage to last a few rounds.”
— Miranda Keyes on the Ark.[5]

The Flood arrived on Earth shortly after the opening of the slipspace portal; the parasite was pursued by a Covenant Separatist fleet led by the CAS-class assault carrier Shadow of Intent. The Flood threat strengthened the UNSC alliance with the Separatists, who initially unified to resist the Covenant Loyalist forces. They hoped to find a solution to the Flood beyond the portal to the Ark.[10]

Once at the Ark, the opposing Covenant fleets engaged one another. However, the UNSC frigate was ill-equipped to fight against such large opponents, and Forward Unto Dawn deployed troops in five Pelican dropships, including John-117, to secure a landing zone on the surface of the Ark that it desperately needed. Forward Unto Dawn landed near the Cartographer and directly offloaded additional heavy equipment to arm the UNSC assault force, who advanced on the map room with M808B Main Battle Tanks.[5] Once the location of the Citadel occupied by the Loyalist forces was found, UNSC Forward Unto Dawn deployed three Pelican dropships. These Pelicans would rendezvous with two Phantom dropships deployed by the Shadow of Intent to strike three towers responsible for stabilizing a defensive energy barrier around the Citadel. However, one Pelican was shot down by Loyalist anti-aircraft fire during the initial engagement.[11]

Following the death of Miranda Keyes, and the joint UNSC-Separatist task force's total victory over the Covenant Loyalists, nearly all UNSC personnel left the Dawn to return to Earth aboard the Shadow of Intent. Avery Johnson, John-117, and Thel 'Vadam remained behind to finish the fight against the Gravemind. After retrieving Cortana and destroying High Charity,[12] John-117 was deployed from Forward Unto Dawn along with Thel 'Vadam to the surface of Installation 08 to reach its control center. Johnson would later rendezvous with the duo on the ground to provide fire-support. The mission to capture the incomplete ring's control center was successful, but Johnson lost his life when he was betrayed by 343 Guilty Spark.[7]

The monitor was destroyed by John-117 and the installation was activated. John-117 and Thel 'Vadam were able to use an M12 Force Application Vehicle left by Johnson to regroup with Forward Unto Dawn where they would narrowly make it into the portal escaping Halo's tactical pulse, obliterating the Gravemind and containing the Flood. However, when the vessel entered the slipspace portal, the portal collapsed as it was hit by Halo's pulse and the frigate was severed in half. 'Vadam, who had run for the command bridge, returned to Earth in the bow of the ship and crashed into the ocean. 'Vadam was safely recovered from the wreck by UNSC rescue teams.[7]

The data from the frigate's bow recovered later contained all what mankind knew about the Ark in 2555. [13]

The aft section containing John-117 and Cortana was sheared from the bow and cast out into unknown space. The Spartan was left in the drifting wreck where artificial gravity was currently disabled. Cortana activated a distress beacon and John entered a cryonic-stasis chamber to wait for recovery.[7]

In 2556, Cortana compiled a history of the Forerunners and Humanity as she descended into rampancy while aboard Forward Unto Dawn.[14]

At an unknown point, the Dawn's path through the Milky Way was altered, forcing it towards an object known in the navigation database as 43121124.[9]

By 2557, the only remaining systems were weapons, gravity, life support, lights and door controls. The engines were offline.[9]

Four years, seven months, and ten days after being stranded, a fleet from Jul 'Mdama's Covenant encountered the remnants of the ship near the Shield World Requiem. John-117 awoke to fight Covenant boarding parties throughout the ship. After making his way to the observation deck, John-117 traveled to the outer hull of the Dawn to launch one of her Hyperion nuclear missiles, destroying a threatening CRS-class light cruiser. Almost immediately after the cruiser was destroyed, Requiem detected the presence of a Reclaimer and pulled in the Covenant fleet and the wreck of the Dawn into the planet's interior surface.[9]

As the Dawn did not survive the transition through the atmosphere in its current state, John-117 tried to make it out in an escape pod, but the escape pods were torn from the ship and the Chief fell to the planet's inner surface. Forward Unto Dawn was then ripped to pieces and destroyed.[9] Fragments were scattered all over a part of Requiem's surface. John, disoriented from the crash, left the wreckage of the Dawn to find a ship to get back to Earth. Miraculously, much like the UNSC Daedalus on Galgalia, a few of the Dawn's Warthogs survived the crash.[15] The remaining wreckage of the Dawn was most likely vaporized with Requiem when the planet was destroyed.

The concept art for the Charon-class light frigate, which would become the Halo 4 appearance of the Dawn.

The wreckage of the Dawn on Requiem.

A left side view of UNSC Forward Unto Dawn.

A right side view of UNSC Forward Unto Dawn.

A comparison between Infinity and the Dawn.

The Dawn arrives over Installation 00.

The Dawn, perched on Installation 00.

Forward Unto Dawn hovering over the new Installation 08 with the Ark in the skyline.

Another shot of the Dawn.

The front section of Forward Unto Dawn entering Earth's atmosphere.

Rear section of the Dawn after being split in two as seen at the end of Halo 3.

The remains of the Dawn being pulled into Requiem.

The wreckage of the Dawn in Halo 4.

Forward Unto Dawn's wreckage on Requiem.

The Chief on the Dawn.

Cortana aboard the Dawn. 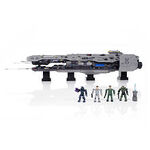 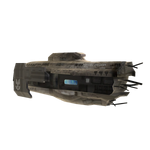 The avatar version of the Dawn on Xbox Live.

The Dawn as it is shown in Halo 4: The Essential Visual Guide.