Were you looking for the song from the Halo 2 Soundtrack, In Amber Clad?

The In Amber Clad was designed by Distinguished Naval Engineer David Pulver and Dr. Eugene Taylor. It was the final ship in a group of 16 Stalwart-class frigates that were constructed at the Sinoviet Naval Yard AS-9 above Reach.[1] Launched on February 9, 2547,[1] nothing is known of its first three years until April 5th, 2550, Commander Miranda Keyes was given command of the ship.[9]

As of October 2552, In Amber Clad was commanded by Commander Miranda Keyes. It was docked with the Orbital Defense Platform, Cairo during an award ceremony. In the middle of the ceremony, however, a Covenant fleet appeared in the system and engaged Earth's defenses igniting the Battle of Earth. Home Fleet ships then began to open fire on the Covenant ships. Though the In Amber Clad did not engage in direct combat over Earth, its crew rescued John-117 after his daring destruction of one of the Covenant's Assault Carriers using their own bomb.[7]

Afterward, the vessel descended to Mombasa, Kenya, where it dispatched numerous Marine units to reinforce the Marines from the 405th Marine Infantry Division, the 17th Marine Regiment and several other units on the ground. During the battle, In Amber Clad served as a headquarters for the UNSC forces in the area, reinforcing and resupplying the ground force. In Amber Clad also began to evacuate wounded marines. Two of the ship's Pelicans were shot down during the battle.[10] In Amber Clad deployed two Scorpion tanks during the battle. The first was abandoned in a tunnel by Master Chief and the second was destroyed by the Covenant Scarab.[11] Three of the ship's ODSTs were also killed, one when their Pelican crashed and the other two in Hotel Zanzibar.[12]

When the High Prophet of Regret suddenly initiated a Slipspace jump inside the city, In Amber Clad was one of the only vessels close enough to follow it. Fleet Admiral Lord Terrence Hood granted Keyes's request to follow Solemn Penance through the Slipspace rupture, despite her ignorance of the larger ship's destination. In Amber Clad's Pelicans were able to retrieve the Master Chief,[11] the ship's ground forces, and the surviving members of "A" Company from the 405th Marine Infantry Division before the frigate was pulled through the carrier's Slipspace rupture. UNSC Coral Sea, UNSC Dusk, UNSC Paris and UNSC Redoubtable were sent to assist In Amber Clad.

In Amber Clad's Slipspace jump left them at Installation 05. Keyes immediately ordered John-117 and a contingent of 13 ODSTs to the surface in Human Entry Vehicles with the hope of locating the Prophet of Regret at a Temple. Although most of the ODSTs were killed during the deployment or shortly after, John-117 and three ODSTs managed to clear a landing zone, allowing Pelicans to deploy regular Marines, a tank, and a Warthog.[13] Keyes, wanting to obtain the Index, left this force behind. While John-117 moved on to kill the Prophet of Regret, his Pelicans and many of his Marines set up a base of operations.

Meanwhile, Sgt. Major Avery Johnson and the rest of In Amber Clad's Marine battalion accompanied Keyes to the Library in order to retrieve the Index and prevent the Covenant from activating Halo. Upon entering the Library, Keyes' forces were immediately attacked by the Flood, which killed most of the Marines.[14] The Flood quickly captured four of the ship's tanks and several Warthogs, adding to the already large fleet of vehicles the Flood was using to fight the humans, the Covenant, and Sentinels. Despite reaching the Index, Keyes and Johnson were captured by the Arbiter, and the few surviving Marines were captured by other Covenant forces. In Amber Clad itself was captured by the Flood, which infected most of the crew members.

The Flood-infected crew members then initiated a Slipspace jump straight into High Charity. In Amber Clad crashed into a tower near the Council Chamber while the Flood commandeered the ship's remaining Pelicans in order to quickly infect the city.

Cortana intended to use In Amber Clad's engines to destroy High Charity. However, she either chose not to or was unable to do as she had intended, and thus could not stop Gravemind from using High Charity to travel through the galaxy. The remnants of In Amber Clad were likely destroyed when the Flood-infested High Charity was destroyed by John-117 on the surface of The Ark.

While the majority of In Amber Clad's UNSC Marine forces were deployed to secure the Delta Halo Activation Index, Flood forces managed to infect the under-strength ship. The remaining crew were infected, and converted into combat forms for use in the invasion of High Charity. A small number, however, managed to outlive their ship.

Commander Keyes herself survived the Sentinel Wall and the Quarantine Zone, as did Sergeant Johnson along with a handful of Marines. While only Johnson and Keyes managed to reach the Index, the other Marines were either killed and/or infected by the Flood upon arrival at the Index chamber, or were captured by the Covenant. Both Keyes and Johnson were captured by the Covenant, only to escape much later thanks to the intervention of a Sangheili-led assault on their captors' base. They would later go on to play pivotal roles in the later stages of the Battle of Earth. Sergeant Stacker and Sergeant Banks were also captured but managed to escape captivity with Johnson. Private Chips Dubbo also survived the Battle of Installation 05 and returned to Earth with the other surviving humans. Five other captive Marines joined John-117 during his advance through High Charity.

Although several Marine bodies can be found on High Charity well after the planetoid had been totally infested, it remains unknown whether these were survivors of In Amber Clad or if they had been killed after trying to follow John-117 into the infected city, though it was stated by Cortana that there were no human life signs detected on that ship.

Concept art of Solemn Penance going to slipspace over New Mombasa as the In Amber Clad chases it.

Alternate concept art of Solemn Penance going to slipspace over New Mombasa as the In Amber Clad chases it.

Cinematic render of the In Amber Clad.

UNSC In Amber Clad docked to Cairo Station immediately prior to the Covenant arrival.

UNSC In Amber Clad over Installation 05.

UNSC In Amber Clad heading towards Installation 05 in Halo 2: Anniversary.

In Amber Clad within High Charity.

In Amber Clad is destroyed after the Flood crash it into High Charity.

An ODST stands in one of the two HEV bays in In Amber Clad.

Commander Keyes and her navigator stationed in the In Amber Clad's bridge.

Cinematic render of the interior of the In Amber Clad. 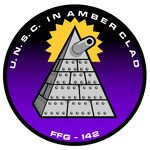 The emblem of UNSC In Amber Clad.

A diagram of In Amber Clad.

Comparison of In Amber Clad to other objects.