As opposed to the Dress Uniform worn at parades and functions, the BDU is intended for use in combat situations. As a large fighting force, the UNSC Marines use a great variety of different BDUs. Standard Marine Battle Dress Uniform consists of armor plating over camouflaged combat utilities, and includes a number of ammunition pockets, holsters, and other features.

Unlike the radically more advanced Mjolnir Armor worn by the Spartan-II soldiers, the Marine BDU does not include a dynamic recharging energy shield, or increased speed/strength, therefore providing far inferior protection against directed-energy and projectile weapons.

The components of the Marine BDU vary, depending on the version.

Camouflaged combat utilities are worn under the armor. The UNSC is known to use a variety of camouflage patterns depending on the environments, including all-grey fatigues, woodland camouflage, urban camouflage or winter camouflage.

Combat boots such as the VZG7 Armored Boots are worn with the uniform, usually equipped with different types of additional armor to provide greater protection to the lower leg.

The Marine BDU is equipped with ballistic armor in multiple points, such as the torso, shoulders, and the lower legs. Some versions incorporate armor in the forearms and thighs as well.

The armor is extremely resilient towards traditional ballistic weaponry. However, it is easily damaged by plasma weaponry. The armor consists of several layers, some of which include a ballistic recoil-absorbing gel layer and a heat reduction gel layer to help reduce velocity and felt shock from ballistics, shrapnel, and explosives as well as reducing the burn caused by plasma once it reaches flesh.

This heat reduction layer also reduces the chance of the plasma penetrating by counter-acting and dissipating the heat, effectively disarming the blast. While this armor protects the wearer from harm caused by weaponry it also has temperature-regulation units integrated into it to keep the wearer at optimum supportability while eliminating the need to change depending on the environment. This also reduces the enemy's ability to track soldiers via thermal energy as it is mostly hidden beneath this armor.

Sometime during 2531, the M52B Body Armor entered service and was standard issue.[1] Lighter body armor, such as Ballistic Assault Vests are also used in some operations.

Marine helmets are mounted with high-tech equipment, such as holographic text-displaying eyepieces, helmet recorders and microphones. Tactical goggles are also used by some Marines. The CH252 Helmet and its variants are standard issue during most of 2552, and what appears to be its early version was worn already in 2531. As well as helmets, Marines on field operations in more humid locales sometimes choose to wear boonie covers, or those in colder environments don visored and thicker helmets. Marines have a Heads-up display not just from their helmets, but from their standard Neural interface which projects HUD data directly to the Marine's retina. In hazardous situations, Gas Masks such as the S90 Gas Mask are worn.

Marine NCOs are easily recognized by the cover that they wear complete with the UNSCDF insignia, although they oftentimes substitute this soft cover for a more practical protective helmet.

Pilots during the late Battle of Earth and the Battle of Installation 00 wore more advanced equipment, fully-sealed helmets and an additional control panel on the standard chest armor piece. Each helmet bears a wing symbol, likely denoting the pilots' particular specialty.

While the standard BDU is most commonly seen in the field, there are multiple specialized combat suits worn by different branches of the UNSC Marine Corps. The armor system utilized by the ODSTs is arguably the most notable example of this, being a sealed full-body combat suit instead of a more conventional armored uniform. During operations in vacuum, Marines wear Vacuum suits, often equipped with armor plating. One example of a vacuum-enabled suit is the Black Body Suit, which is a lightweight, form-fitting suit of polymer body armor. Other task-specific suits exists, such as the fire-resistant full-body combat suit worn by the Hellbringers. Heavier armored variants of the standard BDU were worn in counterinsurgency operations by 2524, including a suit with charcoal fatigues and matte-black Heavy Impact Plating covering most of the body and a helmet that fully encases the head. This suit may be similar to the ODST BDU.[2]

Versions in the games[edit | edit source]

There seem to be a number of varieties to the Marine BDU. It is unknown if the changes between the games are instances of different armor models altogether, or if the changes are simply aesthetic.

The equipment used during the Battle of Installation 04 involved gray fatigues and a soft armor vest, and over that, pieces of brown armor plating covering the head, torso, shoulders, thighs and shins. Overall, this armor seems to be the heaviest incarnation of the Marine armor.

At times, the Marines only wore their utilities and soft body armor, even forgoing helmets and body armor plating in hazardous combat operations. At times, their helmets were also substituted for boonie covers and sometimes bandanas. It is probable these Marines were in various states of undress when the Pillar of Autumn was attacked, and were forced to abandon ship without their full armor. This is the most likely reason why some Marines, those who were on duty or already out of cryo-sleep at the time, have full sets of armor such as the ones chosen for the attack on the Truth and Reconciliation, showing a clear preference for its protective capabilities. Some Marines had small medical packs built into their back armor plating. The helmets also included a small, green tactical eyepiece, a feature not seen in any other versions.[3]

In Combat Evolved Anniversary, the Marines have similar if not identical armor to Army troopers in Halo: Reach, but the pilot of the lifeboat has armor similar to Halo 3's. This is likely due to the fact many of the assets in the game were re-used from past games.

The design of the Marine BDU was completely overhauled for Halo 2. The uniform involved olive green armor pieces, with a woodland camouflage-covered battledress.

It had less armor pieces than the variant seen in the first game, namely lacking armor on the thighs, but also came with more ammunition storage pockets. The tactical vest had two pieces of armor, with numerous storage pouches often attached to it. Some Marines also wore holsters on their other thigh. The armor had black knee and elbow pads, although apparently only lightly armored. The uniform also included armored pauldrons, also lighter than their previous version. The shins weren't also fully armored like the earlier variant, with heavy armor only on the upper shin, attached to the boot. However, the boots appear to be covered in light armor plating.[4]

In Halo 3 and Halo 3: ODST, the BDU used by the UNSC Marine Corps was fairly similar to the one in Halo 2, with several changes. The fatigues now had a lighter woodland camouflage, while the armor itself retained its olive-green color. The armor is still labeled as M52B on containers in Halo 3.

This variant is an evolution from the Halo 2 version, with heavier and well-articulated olive-drab full body armor (armored vest, and heavier armor in pauldrons, elbow pads, and knee pads) over urban camouflage utilities. The torso armor now has a black ballistic vest under it, which also partially extends to the arms, attaching the pauldrons to the vest. The pauldrons are also larger and more sophisticated. The newer variant also includes tactical thigh rigs for additional ammunition storage or weapon attachments.

Marines sometimes don small helmet communications microphones or polarized visors on their helmets, and others carry backpacks. Some Marines also wear black, fingerless gloves, to protect their hands and improve their grip on their weapons.[5]

In 2531, the standard Marine uniform involved gray fatigues, with shiny-brown armor covering most of the body. In many ways, this BDU resembles the one seen in Halo: Combat Evolved, being more heavily armored than the later variants.

With this uniform, the Marines often sported a balaclava, even if in temperate environments. Almost all Marines also wore polarized tactical glasses. The forearms had full armor covering them. The shins, as well as the boots, were also fully armored. Some Marines wore tactical thigh rigs or holsters, while some wore armor covering the thighs. Often the left thigh was armored, while a holster attached to the right one. Much like the Halo 3 variant, the upper torso was heavily armored while the lower part had only fabric armor.

The Marine uniform used on the cold environments consisted of environmentally-tailored armor, with insulated snow camouflage utilities and full body armor and well as insulated and visored helmets with something analogous to a balaclava. The armor was gray while the fatigues had a winter camouflage.[6]

The BDU worn by Marines in Halo: Reach seems to be almost identical to the UNSC Army Battle Dress Uniform worn by members of the UNSC Army, save for the tan coloration instead of olive drab and with leg armor reminiscent of those in Halo 3.

The Marines wear dust-brown armor over a desert/tan uniform. They wear airtight helmets similar to the MP helmet, which provided limited EVA during a boarding of a Covenant corvette. Their chest armor is similar to the Army's BDU and provides protection to the back and front with added protection to the groin. However, the Marine armor variant provides a thick armored collar for added protection. The left shoulder pauldron displays the UNSC logo and lettering underneath and is in the style of the GUNGNIR shoulder armor. The right shoulder pauldron is the smaller UA/Base Security shoulder armor and displays the Marine's blood type under UNSC lettering. For leg protection Marines utilize UA/NxRA utility armor which covers both thighs. They wear armored black kneepads or heavier leg armor along with kneepads supplemented by GUNGNIR knee guards.

As several Marines seen in Halo: Reach were from the Pillar of Autumn, it would appear to be a visual update of the armor worn in Halo: Combat Evolved.

The BDU worn by Marines in Halo 4 changed dramatically with many key changes compared to uniforms worn during the Human-Covenant war. One major change was their armor. There are four different variants but the bases of the armor worn by Marines is a ballistic kevlar body armor with no additional heavy armor attached on the exterior such as the ones worn during the war. The other variants wear different color ballistic vests but some wear additional lighter chest and upper back plate armor over their vests. Aesthetically, they are very similar to the armor worn by CAMS Cadets in Halo 4: Forward Unto Dawn. All sets of armor (excluding corpsman armor) feature an olive green suit and red undersuit made of some kind of durable fabric, the latter possibly being a form of thermal insulation to protect against environmental extremes and plasma burns. Several of these armor sets feature things like ballistic masks, rebreathers, radios and camouflage.

An early design of the armor. This image can be seen on the Hillside Memorial.

Concept art of the armor for Halo 3.

Marines sporting the Halo: Combat Evolved variant of the uniform.

UNSC pilot uniform during the Battle of Installation 04. 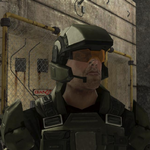 A Marine wearing the CH252 Helmet with tactical goggles.

A Marine wearing the latest version of the uniform.

A variant of the Marine BDU.

Two Marines by a Warthog along with Master Chief.

Concept art of the marines helmets in Halo: Reach, it is also used by the UNSC Army during boarding events.

Retrieved from "https://halo.fandom.com/wiki/UNSC_Marine_Corps_Battle_Dress_Uniform?oldid=1794609"
Community content is available under CC-BY-SA unless otherwise noted.