This article describes the warship. For the musical piece, see Spirit of Fire (Song).

UNSC Spirit of Fire (HCS: CFV-88) was a modified UNSC Phoenix-class colony ship built in 2473.[5] Spirit of Fire's commanding officer was Captain James Cutter by 2531. Spirit of Fire's Ship Director A.I. was Serina in 2531 and later replaced with Isabel in 2559.

The UNSC Spirit of Fire was designed by First Engineer Brandon Hines and Vice Admiral Shauna Glasgow,[2] and constructed by Halifax Spacewerx on Luna.[9] The keel was laid in 2470.[10] The ship launched January 2, 2473.[2]

The ship's first captain was Captain Coleman.[11] Spirit of Fire was originally a colony ship, transporting colonists as well as equipment such as hydroponics and schools, in the UEG's expansion efforts.[12] It was responsible for the colonization of Arcadia, and later colonized Verent in 2520 under Captain Alexander;[9] immediately following colonization, Alexander retired on 20 July.[13] On 1 September 2520 the Spirit of Fire was transferred over to the UNSC and refitted for military service as a fleet support ship during the Insurrection.[14] Among its early missions was the support of Arcadian authorities in suppressing a violent student riot.[15]

In 2530, Spirit of Fire's thrust assemblies were replaced with powerful ones from the scuttled destroyer UNSC Calcutta,[9] increasing output by 37%.[16]

The Spirit of Fire took part in the Harvest Campaign, starting on February 4th, 2531. They were assigned to investigate Covenant activity on Harvest and recover personnel from the UNSC Prophecy.[17] The crew of the Spirit discovered a host of Covenant activity in the north pole that lead to the discovery of a Forerunner relic. There, a map pointed the Outer Colony of Arcadia.[18]

Arcadia and the Shield World

After the events on Harvest, Spirit of Fire arrived at the planet Arcadia, where it assisted in the evacuation of civilians and the eradication of the Covenant from the planet's surface. When Professor Ellen Anders was captured by the Arbiter,[19] Spirit of Fire followed the Arbiter's flagship to a Flood-controlled planet in an unknown system containing a fleet of Forerunner warships. To ensure that the Covenant would not be able to use these warships against humanity, the reactor that powered Spirit of Fire's Shaw-Fujikawa Translight Engine was detonated inside the Shield World's artificial sun. The ship managed to escape the exploding Forerunner installation, but without a functioning slipspace drive, the journey home would take many years, if not decades.[20] Most of the crew entered cryonic sleep at this point, with only a skeleton crew remaining active to run the ship.[21]

Lost With All Hands

On February 10, 2534,[22] Spirit of Fire, previously designated as "missing," was declared "lost with all hands" by the UNSC. The reason for this change was kept top secret. A memorial service was held for the people aboard the vessel, but many of the crew's family members chose not to attend, holding out hope that their loved ones are still alive.[23] Various theories circulated throughout the UNSC as to the ship's actual fate, ranging from being lost during a covert mission for ONI, destroyed in orbit over Arcadia, defecting to Insurrectionist forces, or being stranded in space. When Mary Cutter, wife of Captain Cutter, was asked about the defection theory, she physically assaulted the reporter.[24]

The Spirit of Fire was in fact still drifting through space, and had been boarded by Flood infection forms despite all the countermeasures imposed by Chief Medical Officer O'Neil and was drifting through an unknown star system.

On January 1, 2537 a scheduled maintenance report was disrupted by an outbreak of Flood in one of the cryo-bays. Serina, in the midst of rampancy was unable to effectively read the escalating situation. Serina woke Professor Anders to help with the situation. Jerome-092 woke automatically because of this. With the combined efforts of all three, all the infected crew members and Flood Infection Forms were destroyed.[25]

Serina knowing that the end was near, instructed Anders to begin Final Dispensation procedures. Serina then recorded several contingency logs for Captain Cutter and redacted the reports of the incident. Anders and Jerome returned to cryo-sleep while Serina deactivated. [25]

After the Human-Covenant War, Spirit of Fire, along with the numerous other ships lost in the course of the war, was given an honor at the dedication of the Living Monument.

On June 8, 2557, the UNSC prowler UNSC Taurokado and Fireteam Apollo had discovered parts of the Spirit among the debris in the Korinth Prior system. Following analysis by the Artificial intelligence Turkish, it was deemed unlikely that the Spirit had survived the catastrophic event there.[26]

Search for the Spirit

Later in 2558, UNSC Infinity was dispatched to supposedly rescue the long lost ship behind enemy lines. It was apparently discovered and was being threatened by Vata 'Gajat when it arrived into Jul 'Mdama's Covenant-controlled territory.[27] However, this was actually a trap laid by Daniel Clayton for Admiral Terrence Hood. The ship was not there.

In 2559, the Spirit of Fire arrived above Installation 00. There, the crew encountered The Banished, led by the Brute Atriox.[28] The ship provided fire support with Archer Missiles from space to deliver powerful airstrikes, as well as deploying fire bases and troops into combat zones.

During the battle for the Ark, Spirit of Fire was engaged by the Enduring Conviction, the Banished CAS-class assault carrier. Instead of immediately obliterating the UNSC command ship with onboard weaponry, the carrier sent a swarm of Banshees which quickly began to pick the Spirit of Fire apart. Fortunately, a cunning plan involving a Forerunner particle cannon on the Ark's surface allowed Jerome-092 and a Logistics AI, Isabel, to infiltrate the carrier and destroy it. The Spirit of Fire suffered minor damage, with half of its Deck Guns temporarily disabled, multiple hull breaches and some internal fires.[29]

The Spirit of Fire remains stationed over the Ark, continuing to battle the Banished for control of the installation.

The Spirit was originally equipped with an OKB Karman 11E Shaw-Fujikawa Translight Engine.[2] Though, the slipspace engine would be used as a makeshift bomb to destroy Shield 0459.[30] In order for the ship to traverse slipspace, 4.3 quadrillion calculations of the quantum field would have to be made, per second.[16]

The Spirit carried the following armament.

The Spirit featured a tram system.[31]

The Spirit of Fire had a variety of troops and vehicles it could deploy. The ship housed 6000 Marines, 2000 Army Troops, and 1000 ODSTs. For the ODSTs, there were 600 Human Entry Vehicles available to use.[2]

Due to it's support nature, the Spirit had a variety of dropships and transports. The Spirit maintained 70 D77-TC Pelican Dropships, 56 D82-EST Darters, 10 D20 Herons, and six D96-TCE Albatross Dropships.[2]

The Spirit also carried a number of groundside vehicles. This included 170 M12 Warthog LRVs and 93 M808 Scorpion MBTs.[2] Several other vehicles were carried and could be manufactured by the Spirit too, such as the M850 Main Battle Tank, the M9 Main Anti-Aircraft Tank, the XRP12 Combat Support Vehicle, the SP42 Main Battle Tank and the M312 Heavy Recovery Vehicle.

With the integration of the logistics AI Isabel in 2559, several new vehicles were able to be manufactured aboard the Spirit including the M121 Light Strike Vehicle,[32]the M400 Artillery System,[33] the EV-44 Support VTOL,[34] the Colossus, and the HRUNTING/YGGDRASIL Mark IX Armor Defense System.[35]

The D81-LRT Condor was found on the Ark and taken in by the crew of the Spirit of Fire.[36]

The Spirit of Fire was staffed by a total of 3500 Naval Personnel and 1 Unified Earth Government Personnel.[2] There was also 60 EVA Engineers on board.[16]

The following is a list of individuals who have captained Spirit of Fire at some point, found painted on the side of the ship.[11]

Concept art of Spirit of Fire.

Another concept image, showing a profile view of the UNSC Spirit of Fire.

Concept art of the bridge.

A render of Spirit of Fire.

Spirit of Fire collides with a Covenant destroyer.

The hull area of Spirit of Fire playable in the Halo Wars campaign.

Spirit of Fire above Arcadia.

The holotable of Spirit of Fire 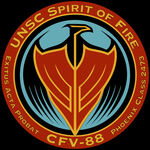 The logo of UNSC Spirit of Fire.