This article is about the UNSC spacecraft classification. For the Jiralhanae vehicle, see [[Jiralhanae prowler]].

The UNSC prowler was a stealth corvette classification within the UNSC.[7] They are used exclusively by the Office of Naval Intelligence and are crewed by select ONI personnel.[8] ONI operates prowlers through the UNSC Prowler Corps.[9]

In 2526, Task Force Yama was created. This task force had three squadrons of Eclipse-class and Razor-class prowlers, with each squad being led by a Sahara-class.[10]

Near the end of the war, the Winter-class light prowler was introduced. At the time, it was one of the most advanced vessels in use.[11]

The Sahara-class heavy prowler was significantly larger than other classes at 281 meters long.[2]

Unlike other UNSC ships which are rectangular, long, and narrow in design, the UNSC Prowler is rather wide and has curved, wing-like extensions on its hull.

In a similar role to its namesake, it is used to gather electronic intelligence, and its primary role is to stay hidden while safely gathering such intelligence, not to charge into battle, as that would invariably be an irreversibly fatal tactic, due to its light weapons and armor. Because of its tactical value and potential to change the outcome of any given combat situation, every UNSC battlegroup has at least one Prowler assigned to its ranks.[12]

The Prowler's only combat role, beside active combat monitoring and recording, is discreetly laying minefields of stealthed nuclear HORNET Mines in orbital regions. Enemy ships that unknowingly enter these minefields can be destroyed by a single prowler, allowing the remainder of the UNSC forces to move in and finish off the survivors with MAC strikes and Archer Missiles. This stratagem allowed Battlegroup Stalingrad to wage a short but devastating battle against the Covenant at Onyx, destroying significantly more ships than their own number, an extremely rare outcome among UNSC-Covenant engagements.

UNSC Red Horse going towards the remnant of Installation 04.

An ONI Prowler in Halo: Initiation. 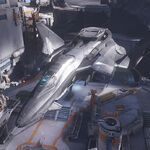