The Unggoy Combat Harness is a type of body armor and environmental suit issued to the Covenant's Unggoy warriors. It provides basic protection from hostile fire, the elements and is also equipped with a breathing apparatus for the Unggoy.

The Methane is stored in extremely cold tanks inside the suit, and is provided to the user through a breathing mask that covers over half of the alien's head. The backpack attached to an Unggoy's back contains a Methane Tank. Attached to every Unggoy's wrist is a readout (measured in Covenant units) of the amount of methane left in the Unggoy's pack.[1] When the tank gets low, a resupply of methane must be found quickly or the Unggoy will suffocate. The suit also displays the color of the Unggoy's rank. The breathing mask of the Unggoy also makes speech difficult for them, as it muffles their words.[2]

In Halo 3, both the breathing mask and backpack component of the suit can be knocked off while the Unggoy is still alive or dead; this causes the Unggoy to suffocate if still alive. If the actual breathing mask is knocked off of the Unggoy, it will begin to suffocate, running in circles desperately until dropping dead from asphyxiation. It is interesting to note that in Halo 3, even if Unggoy lose their methane tank on their back, they can continue fighting without suffocating. This may mean that there is emergency Methane, stored inside their Combat Harness. However, this is more likely just for gameplay reasons. The breathing masks can also be removed by projectiles and explosions. Even though a grenade can rip off the breathing mask in Halo 3, you cannot see the mask come off but you can see methane rise in the air.

In addition to its life support role, it is equipped with armor. This armor can withstand limited amounts of fire, especially from energy weapons. The M6D pistol is capable of easily cracking through the armor and is considered by some to be the standard weapon for such actions.[1] The rounds of the Assault rifle are also potent weapons against the harness. As well as defending against projectiles and plasma, it prevents a limited amount of fall damage to its user, unlike its Sangheili counterpart. Despite this, most variants are vastly inferior to the other types of armor adorned and used by the Covenant, no doubt due to the costs required to produce the suits for the extremely large population of Unggoy soldiers. Some variants are also equipped with helmets, Active camouflage and a methane-filled breathing apparatus.

The visual appearance of the Unggoy Combat Harness has changed considerably every time it has appeared in fiction; this has led to confusion as to whether or not these are separate variants or if the differences are simply aesthetic in nature. In Halo: Combat Evolved, there was a variant with a partially curled-back methane tank, along with a bigger face mask. This variant is commonly referred to by fans as "Curl-backs." This variant is absent in newer titles. In Halo Wars, the suicide-Unggoy used a cylindrical-back methane tank, along with a goggle-equipped mask. In Halo: Reach, the design of the harness varies greatly between different Unggoy ranks.

An Unggoy Minor in its Combat Harness.

'Curl-back' Unggoy at the ready. 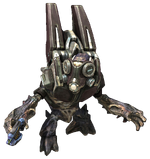 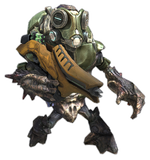 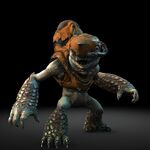