The Unggoy Minor is the lowest and most common infantry unit in the Covenant Army.

Minors are the lowest form of rank in the Unggoy ranking system, essentially being little more than expendable cannon fodder, although they prove much more of a threat in large numbers. They are one of the most common enemies, rivaled only by the Flood Infection Forms. However, on higher difficulties such as Heroic and Legendary, they became somewhat uncommon, mostly replaced with Unggoy Majors and Ultras.

Bearing light-orange methane breathers and armor, Sangheili and Jiralhanae often send them into battle with little or no compunction.

Minors are the rough equivalent of the UNSC Private. Theoretically equal in rank to Kig-Yar Minors, they will often be seen in groups with several other Unggoy Minors, usually being led by an Unggoy Major, Sangheili, or Jiralhanae. Minors exhibit various combat behaviors when their commander is killed; the most common combat behavior being to simply retreat and seek cover, but sometimes will arm themselves with plasma grenades and attempting to perform a suicide attack by charging towards the enemy.

Early render of a Minor in Halo 2.

Cinematic render of a Unggoy Minor for Halo 2: Anniversary.

Another render in Halo 3

Halo: Reach
Add a photo to this gallery 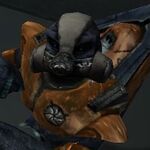 A close-up on a Minor in Halo: Combat Evolved.

The Cowardly Unggoy, a Minor.

A Minor on Lone Wolf in Halo: Reach.

A Minor equipped with a Needler.

Unggoy Minors firing upon SPARTAN Davis in Halo: Spartan Assault.
Add a photo to this gallery

Retrieved from "https://halo.fandom.com/wiki/Unggoy_Minor?oldid=1808940"
Community content is available under CC-BY-SA unless otherwise noted.