The United States of America (U.S.A.) was a federal constitutional republic comprising over sixty different districts.

At some point before 2525, the United States has formed a loose association with Mexico and Canada to form the United Republic of North America. As well, soil issues began to plague the Midwestern United States, causing many to leave the US and Earth.[1]

When the Covenant Empire reached Earth, a contingent of forces began assaulting the city of Cleveland under false claims by Colonel James Ackerson.[2]

Several years after the Human-Covenant war ended, a newly awakened Ur-Didact would use his Composer on the New Phoenix area. John-117 would end up destroying the Composer,[3] but at the cost of six million inhabitants.[4]

The United States was composed of fifty states (four of which being technically commonwealths),[5] and Washington, D.C., the capital district. However, by the 26th-century, the United States, along with Canada and Mexico, have formed the United Republic of North America.

Evidence suggests that by the 26th century, the United States no longer existed as a political entity. This is supported by the Halo Encyclopedia, which describes the United Republic of North America as being composed of Canada, Mexico, and "the political remnants of the United States," suggesting a dissolution of the Union.[6]

Additionally, in his report on Admiral Preston Cole, Codename: SURGEON makes reference to the Battle of Gettysburg, which he describes as taking place during "the first American Civil War."[7] This wording strongly suggests that there was in fact at least one more civil conflict.

However, in i love bees, Rani Sobeck makes direct reference to the Fifth Amendment, implying that the Constitution is still in effect, in 26th-century America. Additionally, the IRS continues to exist.[8]

The country was situated almost entirely in the western hemisphere: it lay in central North America between the Pacific and Atlantic Oceans, bordered by Canada to the north and Mexico to the south; the state of Alaska is in the north-west of the continent with Canada to its east, and the state of Hawaii is in the mid-Pacific. U.S. territories, or insular areas, are scattered around the Caribbean and Pacific. 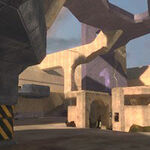 Cleveland, Ohio during the Battle of Cleveland.