The untitled Halo MMO, codenamed Titan or Orion project, was a Halo game planned between 2005 and 2007.[1]

While concept art was produced and Bungie planned to work with Ensemble Studios on the game, the other non-Halo Wars related teams were disbanded to focus on the RTS instead.[2] It was discontinued as Microsoft "decided that its Xbox platform and XBLA really needed to go more in the direction of appealing to a more casual, broader audience."[1]

“Ensemble has been wanting to make an MMO for a long time. That was in production for a long time. The Halo IP was a great IP to launch an MMO with. Microsoft... hasn't had the best track record with those.
And we worked on it for a long time--we had staffed up an almost-40 person team. And then there was some reorganization at Microsoft, and the new bosses thought it wasn't the best idea anymore. It had actually been green-lit, and then it got cancelled after that.”
— Dave Pottinger[3]

The concept art shows various new additions to the franchise such as the Sentients, Runner-class Transport, Aardvark, Diggerz, Grackle, Jaggmaw Sawtail, Rhino, Psion and Rogue.[4] Former Ensemble employees have commented that, while comments comparing released screenshots and concept art comparing it to "WoW in Space" were accurate and that the early builds of the project drew inspiration from World of Warcraft for the basic structure and style, the more advanced builds were radically different before it was discontinued.[1]

“Just to give you a couple of examples, we were using a heroic stylised artform. This heroic stylised artform is exactly the artform that you see being used in Star Wars: The Old Republic right now. It’s timeless. It doesn’t age itself like a game that’s built with a strictly realistic artform does.
We were developing a cover system. This cover system is in Star Wars: The Old Republic. We had the idea of quests - and like I said, this was between 2004 and 2007, before Warhamer Online had been released - but we had this idea of quests where you could participate and pull them together without having to be on the same team. This would be a public quest that everyone in a particular area could work on. That idea went into Warhammer Online.”
— Dusty Monk, former Ensemble employee[5]

A close up of a Forerunner structure. Note the similarity to the Halo 2 multiplayer map "Ascension." 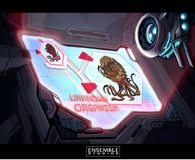 An unknown Flood form being analysed by a Forerunner Monitor.

Species within the MMO.

The Covenant species concept art for the Untitled Halo MMO.
Add a photo to this gallery

Retrieved from "https://halo.fandom.com/wiki/Untitled_Halo_MMO?oldid=1794834"
Community content is available under CC-BY-SA unless otherwise noted.