For the nature park and zoo in New Mombasa, see Uplift Nature Reserve.

Uplift Reserve is the fourth campaign level of Halo 3: ODST. Played from Dutch's point of view, it takes place in the Uplift Nature Reserve in New Mombasa.

Completing this level on Normal or above unlocks the Uplift Reserve achievement as well as the Dutch character for Firefight mode.[1]

Uplift Reserve is chronologically the second flashback level of the game. The level opens 30 minutes after the drop, as a UAV observes Dutch walking on the beach of Uplift Reserve. He watches the aircraft fly overhead toward New Mombasa before proceeding to move out of the park through heavy Covenant resistance, including Wraiths and multiple other vehicles. Several Marine platoons are also present in the area, and at one point Dutch is tasked with finding one of them. While driving into the last section of the park, Dutch witnesses the collapse of the Orbital Elevator. In the end, he manages to drive out of the park through a large gap in the perimeter wall caused by falling elevator debris and right into the streets of the city.[2]

Two Drone Fighters fly toward the city over the Uplift Nature Reserve, one of the Drone's cameras zooms in on an SOEIV on the beach, and an ODST walking away from it. The ODST is Dutch who watches the Fighters fly overhead. View then switches to Dutch's perspective.

Dutch heads up a hill to a clearing where Marines are engaging Covenant armor and infantry, a group of Marines are taking cover near an overturned Warthog, one of the Marines spots him.

Together they take out the enemy infantry.

They engage heavy Covenant armor, including Wraiths, Choppers and Ghosts.

After defeating the first Wraith, another moves up and a Phantom arrives dropping off reinforcements; those are soon defeated as well.

The Marines move to another section of the park where they encounter Shades, Choppers, Banshees and more infantry, the Marines head up the hill taking out the Covenant defenses.

A Brute tries to escape on a Ghost.

Dutch arrives at second platoon's location. They are under heavy fire from more Covenant armor and infantry.

If Dutch takes too long:

As Dutch and the Marines cross the bridge, the Space Elevator, already weakened from the Slipspace rupture, implodes in different sections and collapses, sending debris flying for miles.

A part of the elevator crashes into the building Dutch and the Marines are driving to.

If the player stops:

Dutch soon arrives at the Assault Carrier's old LZ, where a group of Marines are pinned down by more Covenant troops.

If Dutch drives over to the Marines, one of them has broken his ankle. Although a Medic is tending to him, the first Marine has lost his mind.

Dutch finally reaches the top of the hill, and is faced by one final Wraith, a War Chieftain and many Covenant forces.

Dutch drives off the cliff, into the streets below.

Dutch's Warthog/Ghost/Chopper flies off the cliff and lands on the streets below, bouncing once, then crashes into a building. Dutch falls out after the bounce, and his helmet falls off.

The view switches to a Superintendent camera that is watching as a Drone Fighter crashes into a monument. The Superintendent's avatar shows the "sad face" image. The optics detaches from the fighter and crashes to the ground, where the Rookie later finds it. Dutch gets up, helmet in one hand.

The vehicle Dutch was driving previously explodes behind him. He turns around to face it. 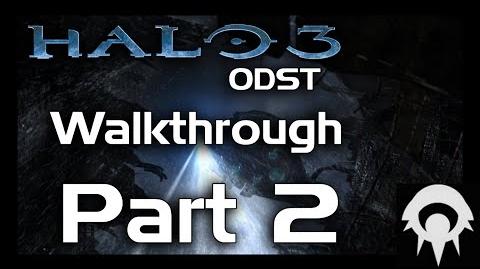 Part of the Warthog charge through the park.