Looking for the event Changing of the Guard, the graphic novel series Halo: Uprising, or the Halo 2 Vista Uprising achievement?

The surface of Installation 05.

Uprising is the thirteenth campaign level of Halo 2, and the twelfth playable one.

As Thel 'Vadam, the player must battle their way through Jiralhanae, Kig-Yar, and a few Yanme'e to reach a rendezvous with Rtas 'Vadum. Along the way, they will receive some aid from Unggoy and other Sangheili, most notably a Zealot.

Thel 'Vadam is seen arriving on a cliff face via teleporting from the Gravemind. The view shows a view of Delta Halo's Control Room. He then turns to his left and finds a conveniently-placed Plasma Rifle, lying on a rock stained with Sangheili blood, and readies himself on the path ahead.

Thel 'Vadam sees Brute Shot grenades going off in the distance, followed by Plasma Rifle bursts firing in the air.

'Vadam picks up an Energy Sword.

'Vadam ambushes the Jiralhanae and assassinates them.

Or alternatively, if spotted:

After 'Vadamee reaches the doors of a structure, a cloaked Special Operations Sangheili arrives from the door and helps 'Vadam to kill any remaining Jiralhanae.

The Sangheili turns and looks at 'Vadam, then tightens his fist.

If 'Vadam moves into the structure before the rest of the Sangheili reinforcements do..

If 'Vadam waits until the reinforcements enter the structure.

Once the Sangheili clear the first room of the structure, they find two Unggoy running about. With their help, the Sangheili finish off the remaining Jiralhanae, Kig-Yar and Yanme'e in the area.

'Vadam and his allies enter the next room where several more Jiralhanae take defensive positions.

Later, 'Vadam finds a Grunt cowering in a corner. Sometimes, he will speak as follows:

As 'Vadam and the allies enter a hallway with dead Sangheili, Unggoy, and weapons scattered about.

'Vadam and his allies go into another room, where more Covenant Loyalist forces await. The forces are easily defeated.

The lance soon enters another room, with more Sangheili and Grunt corpses and scattered weapons. As the door to the outside opens, several Jiralhanae and Kig-Yar are taken by surprise as the Sangheili (and any remaining Unggoy) charge at them.

Step Aside, Let the Man Go Through

As the Sangheili head forward, more Jiralhanae await and are soon eliminated. A few Ghosts are placed near the position. The Arbiter pilots one of them, and the Sangheili follow on foot.

'Vadam takes the vanguard and surprise-attacks the nearby Jiralhanae camp head-on. The Sangheili follow, as a big battle takes place between Plasma Turrets, Ghosts and infantry.

After clearing the Loyalist forces in the area, Kig-Yar behind follow up to reinforce the camp, and after they are eliminated, 'Vadam and his allies follow up on the next camp, where a Grunt on a Plasma Turret aids the Swords of Sanghelios. A few more Jiralhanae-controlled Ghosts and a Spectre try to stop the Separatist forces with failure.

A small Kig-Yar camp awaits in the next area, and is easily taken care of by 'Vadam. Some Sangheili take the opportunity to pilot the Ghosts throughout the camp.

Another Loyalist camp awaits with Power Cores placed at the front to stop the Separatists, and a few Kig-Yar Snipers as support. The Separatist forces crush the defenses and rush through to the next area.

The next area is guarded by multiple Jiralhanae and a few Wraiths. Once most of the area is cleared of Jiralhanae, a few more Sangheili Drop Pods land to reinforce the current Separatist pack.

Inside a structure room, they find a cache of Human and Covenant weapons.

They see Phantoms fly over them. It stops above the platform of the Delta Halo Control Room. Tartarus lands from the gravity lift, with Commander Miranda Keyes and 343 Guilty Spark in captivity. Tartarus greets the Jiralhanae guards with growls. He enters, and the doors close behind him.

A Jiralhanae controlled Phantom lands at the Control Room door.

An environmental shot of the beginning of the level. 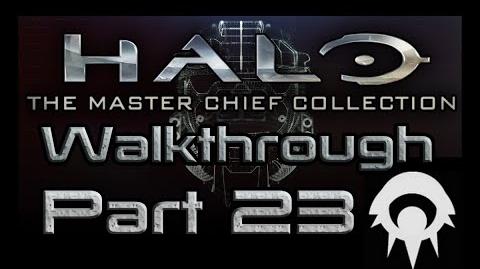