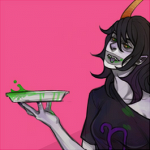 stigma
1. a mark of disgrace or infamy; a stain or reproach, as on one's reputation.
2. Medicine/Medical

a. a mental or physical mark that is characteristic of a defect or disease: the stigmata of leprosy.

b. a place or point on the skin that bleeds during certain mental states, as in hysteria.

3. Archaic. a mark made by a branding iron on the skin of a criminal or slave.

Hello. My name is Stigma-231, colloquially known as Stigma. I am out of my prime, and I am no longer here, and yet somehow, you've found me. I do not know how you managed such a feat, but I will not question it; instead, I welcome you, and suppose I should introduce myself, just a little bit.

I am a gamer who just happens to have female genitalia. I always have been, and figure I always will be, though time does not always award me the luxury of pursuing such leisurely endeavours. That's how things normally go, isn't it? But I still play when I can, though the genres vary immensely. I have a few hobbies other than video games, but not an explicit amount. Most aren't as markedly exciting.

It seems as though I don't have a whole lot to say about myself, then. There isn't much to say in few words. If you, for some reason, want to know more about one of perhaps many fallen editors of the wiki, you can always try messaging me, preferably on my talk page, though I'm not around much anymore. When I'm in a more sociable mood, you might think to add me on MSN (ynir@live.com), or perhaps Xbox Live—though that's normally saved for closer friends, as I talk to even fewer people on there.

You found me, and yet I haven't much to say. I apologize, but also would like to congratulate you for doing so. And thank you. It seems as though I'm not just dust and echoes. Not yet, anyhow.

Halo was one of my first serious undertakings in gaming, becoming something of an obsession at some point in time. At the peak of that, I was here, serving Halopedia. I was somewhat prominent, I'd like to think, coming into ownership of rollback rights at the very height. It wasn't long after that, though, that my sense of duty took me elsewhere, until I was an administrator of four wikis, more actively so on some than others. Time has brought me away from all of that, ultimately. Now I only return when I find myself curious about something or other, or when I have been specifically summoned. Neither happen very often.

In spite of such circumstances, however, Halo will always have a very special place in my heart. I remember playing Halo 2 with my friend, and how much I loved it, even though I was terrible at it. I was anywhere from nine to twelve, I think, so I wouldn't expect much from myself at the time. When I got a copy of my own, I couldn't put it down, even though I didn't have Xbox Live. I played campaign over and over again. Then, Halo 3 came out, and I was excited. It didn't disappoint, even when I got my own copy the year after it came out. It was even better when I got Xbox Live to accompany it, and how.

Halo 3 holds a lot of memories, in particular. It's...given me a lot, to say the very least. It was the height of my time with the series, when I was present on the wiki the very most.

By the time Halo 3: ODST was released, I was still a little excited, but things were certainly tapering down. I enjoyed it, and I suppose that's what matters most. Sadly, Halo: Reach came too late, and though I tried, I couldn't get hyped after the end of the beta. The campaign was awe-inspiring, and I played it for the entire week, as I happened to be on a break. Though I feel it was a fine send-off from the amazing people at Bungie, I just couldn't get myself as into it as I was that first week. I still kick myself for that.

After many years of Halo, it wasn't until Christmas of 2010 that I played Halo: Combat Evolved for the first time. I just beat it today, actually, and that's why I'm here right now. For the first time in a very long time, I am complete. I wanted to say, somewhere, that I really enjoyed this series. It's life-changing; maybe not directly, but it is certainly changing. Maybe it's too little, too late on my behalf, but I still wanted to give a big "thank you" to this series, even if it's on some site where no one will ever see it. I'll fix that, sometime, if only I can figure out how.

No, you can't has it unless I tell you otherwise or add it to your page myself.

Retrieved from "https://halo.fandom.com/wiki/User:Stigma-231?oldid=1778076"
Community content is available under CC-BY-SA unless otherwise noted.