NEWS: All Xbox 360 Halo Games Now Available on Xbox One, via Backward Compatibility

Today, after almost three months of eager anticipation, the remainder of the Xbox 360's catalogue of Halo games is now available on Xbox One via backwards compatibility. As of less than two hours ago, Halo 3, Halo 3: ODST, Halo: Combat Evolved Anniversary and Halo 4 can all be played on Xbox One, without requiring any additional purchases (provided you own the games on 360).

As with all games on Xbox One, these games must be installed before they can be played. If you own a physical disk, simply insert it into your console and it will prompt you to install the game. Meanwhile, those who own digital copies will find the games waiting in the "Ready to install" section of the "Games & apps" program. Note, however, that digital copies of Halo: CEA are not supported currently; only disks will work, according to Major Nelson.

The arrival of these games on Xbox One means that now, all Halo games are available on the platform in their entirety, with the exception of Halo: Spartan Strike (and Halo Waypoint, though few would consider that a game). In addition, Halo 3 will be celebrating its 10th anniversary next week, and it's great that these releases happened in time for that.

Xbox's backwards compatibility team has done marvelous, commendable work bringing all the 360 Halo games to Xbox One, and here's to hoping that Halo: CE and Halo 2 will be some of the games supported when original Xbox back compat rolls around later this year. 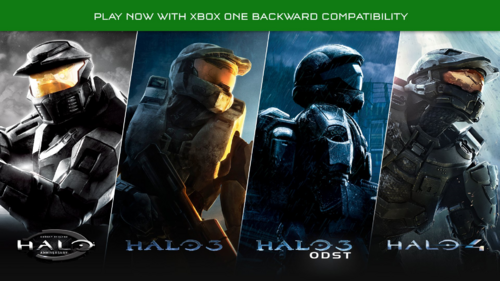 Retrieved from "https://halo.fandom.com/wiki/User_blog:Dab1001/NEWS:_All_Xbox_360_Halo_Games_Now_Available_on_Xbox_One,_Via_Backward_Compatibility?oldid=1784618"
Community content is available under CC-BY-SA unless otherwise noted.