In a huge barrage of Halo news that occured a little over an hour ago, several major announcements were made, at least one of which will interest every Halo fan in some way.

Firstly, Halo 5: Guardians will be getting a 4K update for the release of Xbox One X. The title was absent from the list of games getting 4K updates that was presented at Xbox's E3 press conference, but 343 have stated that they were merely not yet ready to make an announcement. This means that Halo 5: Guardians and Halo Wars 2 will be the first Halo games to be playable at 4K resolution on consoles, when these updates roll out for Xbox One X users later this year.

Next, and most important for some - including myself - comes the revelation that by the end of this year, every single Xbox 360 Halo title (besides Halo Waypoint, although few would consider that a game) will be available on Xbox One, via backward compatibility. Already playable are Halo: Reach, Halo Wars and Halo: Spartan Assault. Later this year, however, Halo 3, Halo 3: ODST, Halo: Combat Evolved Anniversary and Halo 4 will join them in the list of backward compatible titles. In addition to this excellent news, every single piece of DLC for each of the Xbox 360 Halo games is, as of now, free as well! 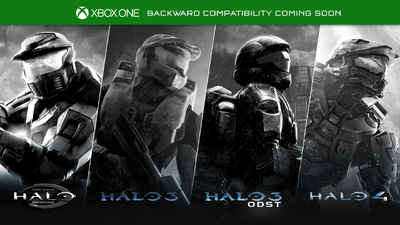 All Halo games besides Halo: Spartan Strike are available on Xbox One.

As well as this, the remaining content for the Halo Wars 2 season pass has been unvieled. The two remaining leaders are Serina and an Unggoy (Grunt) named Yapyap the Destroyer. Serina will release this month, in July, as will the upcoming campaign expansion Operation: SPEARBREAKER. Yapyap, on the other hand, will be the final piece of DLC released in the Season Pass, releasing in August.

Finally, a matchmaking playlist will be added to Halo 5: Guardians on the 10th anniversary of Halo 3's release, titled Halo 3 Anniversary Throwback. It fill feature several Forge remakes of Halo 3 maps, as well as gamemode settings that simulate those of the title. A commemorative live stream will also be held to celebrate the anniversary.

While much of this is some time away, it is nonetheless excellent news. If you want to read the announcement yourself, it can be found on Halo Waypoint, here. 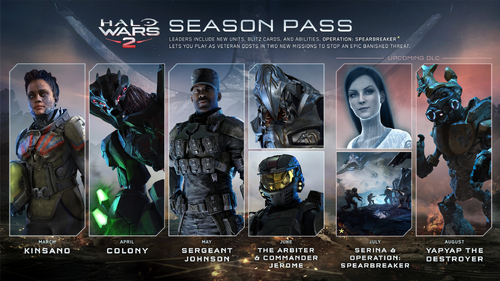 The contents of the Halo Wars 2 Season Pass.

Retrieved from "https://halo.fandom.com/wiki/User_blog:Dab1001/NEWS:_Halo_Summer_Celebration_Announcements:_Halo_Wars_2,_Halo_5_and_more?oldid=1764846"
Community content is available under CC-BY-SA unless otherwise noted.