Operation Spearbreaker follows a squad of highly-trained ODSTs in their mission to save the UNSC Spirit of Fire from a Banished plot which threatens to destroy it. The squad, led by Major Vaughan, acts as a hero unit throughout the mini-campaign and contains a sniper, engineer armed with a Rocket Launcher, three ODSTs with Suppressed SMGs and a drone. Meanwhile, the antagonist of the story is Colony, a DLC leader introduced in April.

Serina as a leader focuses on ice-related powers, similar to Anders in Halo Wars. In place of Hellbringers, Serina fields Cryo Troopers, who freeze their opponents rather than burn them. In addition, Serina can use aircraft called Frostravens on the battlefield, which are similar to Nightingales but cannot heal - instead, they can douse enemies in frost using a chin-mounted cannon. Finally, Serina's hero unit is the Bison, a vehicle which sports a mounted cannon for freezing enemies and can also lock down to create an aura which slows enemies.

Next month's DLC leader is Yapyap the Destroyer, and then some time after that, in Autumn, Halo Wars 2: Awakening the Nightmare will release. For those interested, Serina and Operation Spearbreaker can be bought in a bundle together for $9.99, here. Individually, they cost $5.99 each and are available here and here. 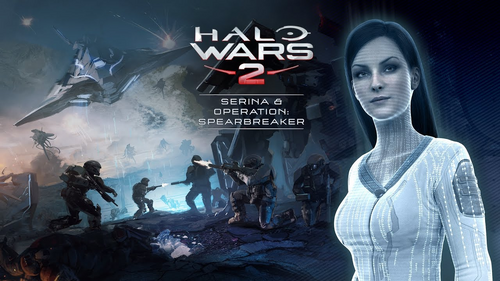 A promotional banner for the DLCs.

Retrieved from "https://halo.fandom.com/wiki/User_blog:Dab1001/NEWS:_Operation_Spearbreaker,_a_Halo_Wars_2_Campaign_Expansion,_Has_Released?oldid=1779858"
Community content is available under CC-BY-SA unless otherwise noted.