NEWS: Yapyap the Destroyer, a New Leader, Has Released for Halo Wars 2

Earlier today, the latest and final piece of DLC in the Halo Wars 2 Season Pass was released: a new leader called Yapyap the Destroyer. Yapyap is a Grunt who has led a revolution against the Banished, and he fields several units that are new to Halo Wars 2.

Among Yapyap's arsenal are the Grunt Goblins, which act as his hero unit, and he can field up to three at any one time. Additionally, Yapyap has access to the Methane Wagon, a vehicle which (once unlocked from the leader power menu) can be trained from main base structures. He fields two new infantry units: the Brute Rider, a Grunt which rides on a Brute's back, and the Heavy Grunt, a squad of Grunts, one of which holds a Fuel Rod Gun. Finally, although not a unit, Yapyap is the first leader to use Banished Shades on the multiplayer battlefield.

Yapyap the Destroyer is the final piece of DLC included the Halo Wars 2 Season Pass, but there is another piece of DLC for the game on the horizon: Awakening the Nightmare, which is slated to arrive some time in Autumn. Until then, Yapyap will have to be enough to sate players' appetites for Halo Wars 2 content. Those who don't already own Yapyap can purchase him here. 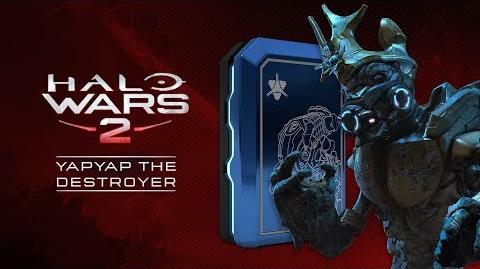 Retrieved from "https://halo.fandom.com/wiki/User_blog:Dab1001/NEWS:_Yapyap_the_Destroyer,_a_New_Leader,_Has_Released_for_Halo_Wars_2?oldid=1784614"
Community content is available under CC-BY-SA unless otherwise noted.