“The crew of V-398 barely survived their unplanned landing in this gorge... this curious gorge.”
— Valhalla's description

Valley, grass, rocks, snow, and rivers all contained within a canyon.

Valhalla (Riverworld in Halo Online) is a multiplayer map in Halo 3. The map itself is a sparsely forested valley with mountains in the distance, featuring a stream, rocky outcroppings, and large hills. It is said to be a "spinoff of the Blood Gulch map from Halo: Combat Evolved."[citation needed] Valhalla was remade for Halo 4 as Ragnarok.

The map is similar in shape to Blood Gulch but has unique elements of its own. Valhalla is not a remake of Coagulation, nor is the downloadable Standoff either. Valhalla also has features from the Halo: Combat Evolved level, Halo. The most obvious feature is both the narrow stream and the bases themselves. The stream starts in the mountains behind the blue base, and comes out as a waterfall. The stream then flows in front of the base, under an outcrop, then down between the two prominent hills on which players find the Spartan Laser and the AIE-486H Heavy Machine Gun. Finally, it bends around red base, and empties into a large lake. Also, there are two caves in the map: one that goes through the hill between the crashed Pelican and blue base, and another that goes through the hill between the Pelican and the red base. Do note that if weapons are dropped into the river, they might drift downstream. However, grenades dropped into the stream will stay where they are.

The distinguished beam emitter bases are Forerunner technology. They are similar to the structures seen in the Halo PC multiplayer map Infinity, Timberland and in the campaign level Halo, while the lower portion is reminiscent of the bases in Blood Gulch. There are three entrances to the inside of the base; two on the sides as seen in many screenshots, and another located behind that dips down into the base. Replacing the teleporters are the Man Cannons. The largest one, on the front of the base, will send you out a third of the way out into the main battle area, while the smaller ones on the side of each base send you a short distance to the nearby cliff for a quick getaway. The bases feature a shiny glass floor on the interior, allowing players to see who is above them and vice-versa.

As previously stated, there are two similar hills on either side of the river. On the higher one spawns the Spartan Laser, while the lower hill holds an AIE-486H Heavy Machine Gun. Each base holds a Sniper rifle inside the rear entrance, a pair of Frag Grenades, and a pair of Plasma Grenades. Numerous Battle Rifles spawn around the map: two on top of the base next to the smaller Man Cannons, two underneath the base alongside each entrance along with two Plasma pistols, two on the terrain where you land after taking off from the Man Cannons, and one that spawns in each cave. A Shotgun spawns inside each of the caves as well, and Spikers spawn on the top of both bases near the Missile Pod. A pair SMGs also spawn on each base and are located next to the Plasma Grenades. Valhalla is a very good sniper map since you can snipe opponents clear across the other side of the map, and when players take the bases' Man Cannons for rapid transportation, they become easy targets for experienced snipers.

The Missile Pod spawns on top of each base to provide initial anti-vehicle defense. The current set per base is a Banshee, Warthog, Wraith, and two Mongooses. However, in the Matchmaking playlists the vehicles are limited to a Warthog, a pair of Mongooses, and a Banshee per base (in 4v4 matches, most notably in Team BRs, the Banshee is sometimes removed). A Power Drain spawns on top of each base next to the Missile Pod, while the Bubble Shield spawns at the neutral Mongoose near the Forerunner wall.

Like the Halo Installations, the planet is populated by a mixture of flora and fauna, some unique and others peculiarly similar to Earth classes, and, as mentioned before, the bases are Forerunner energy stations.

There are also points on the top of the spires that can be reached by Banshee, Hornet, or in Forge, but these areas will not be listed.

A battle on Valhalla.

A player fires a Spartan Laser towards Blue Base in Valhalla.

The crashed Pelican is clearly seen in the red box.

A Pelican seen in the shadows of the trees of Valhalla.

The picture of Kilroy as seen on a rock near Blue Base.

The inaccessible waterfall on Valhalla.

The sniping spot in the cliffs. 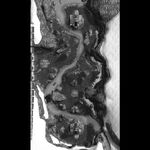 A birds-eye view of Valhalla.

The layout of Valhalla.

A view from high above Valhalla.

A CTF match on Valhalla. 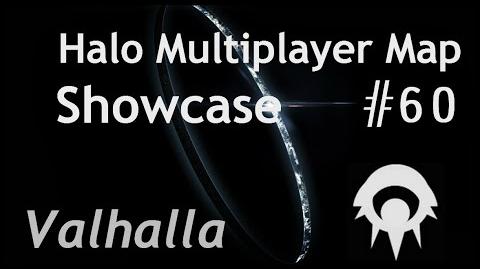 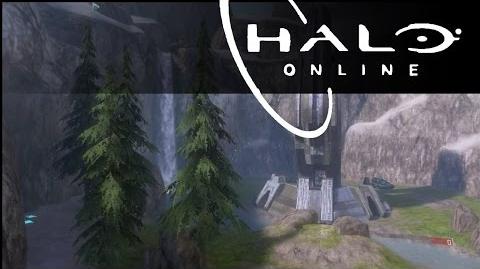