The Watchtowers are the prominent Guardians of a Halo 3 Multiplayer Map, Sandbox. They also stand as the Guardians for the Sandbox Skull.

The Watchtowers are one of the most, well-known of Guardians. These Watchtowers reside on the far ends of the map, these towers are known to be tall, and give out a yellow or golden light. Judging on their symbolic appearance, the Watchtowers could be of Forerunner origin.

The Watchtowers weaponry is explosive and comes in a laser format. The laser beam itself seems to be of Forerunner origin, when comparing to the Sentinel Beam. This is because of its similarity in style, color and appearance. The beams damage is devastating, it can destroy anything in one hit, except Forge objects, and the Bubble Shield.

A Watchtower next to a Flag Marker on Sandbox.

Two Watchtowers viewed from the Sky Bubble of Sandbox. 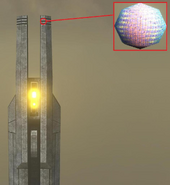 One of the Watchtowers on Sandtrap, also highlighting the Da Vinci Code Object.
Add a photo to this gallery

Retrieved from "https://halo.fandom.com/wiki/Watchtower?oldid=1661585"
Community content is available under CC-BY-SA unless otherwise noted.