Unknown, possibly Earth (Luna is visible through hole in cavern)

Waterworks is a Halo 2 multiplayer map.

This huge map was found mostly in the Big Team Battle playlist, and is a symmetrical area with bases on either side. This map is built mainly for games of 8 versus 8 Assault and Capture the Flag. There are several stalactites hanging from the ceiling which can be brought down by shooting them repeatedly. However, if they are shot with an explosive it will fragment and not be able to damage anything. If they hit an opposing vehicle or enemy, it is an instant kill. It is similar in many ways to the cavern parts of the campaign level, Uprising. If you are killed by the large piston in the center, you will be killed by the Guardians.

Waterworks is arguably the biggest multiplayer map in Halo 2, only rivaled by Containment.

The bases have a total of three floors. The first floor has a window, some crates, and a Battle Rifle, Plasma Pistol, SMG, and a Magnum. The second floor is unprotected but with more ammo, with a Needler, Sniper Rifle, Frag Grenades, SMG, a Battle Rifle, and a machine gun in a little protective alcove that is good for suppressing enemies. A ramp leads to the "hangar bay" that has a Banshee, a Battle Rifle, and a one way teleporter. In the front, there is a small parking lot that has a Warthog, Ghost, and (usually) a tank of some sort. This is the same for both bases.

The teleporters lead to a personal bridge for each team, that has a Rocket launcher, an SMG, and a Plasma Pistol with a Carbine. Both these bridges lead to the same place, but they are all pretty vulnerable to snipers and gunners.

Both these bridges end up in the same place- the bases and the piston. This place has the Energy Sword, a Sniper Rifle, a Brute Shot, a Battle Rifle, Rocket Launcher, and more. This piston also has the central bridge that connects the bases to one another. 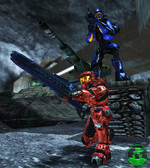 Waterworks.
Add a photo to this gallery 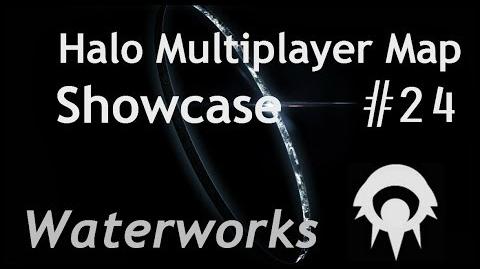 Retrieved from "https://halo.fandom.com/wiki/Waterworks?oldid=1794991"
Community content is available under CC-BY-SA unless otherwise noted.