This article is about the level. For the UNSC protocol of the same name, see [[WINTER CONTINGENCY]].

Winter Contingency is the second campaign level of Halo: Reach and the first level to feature gameplay.[1] It immediately follows the first level Noble Actual, which includes the game's opening cinematic.

In the level, Noble Team is sent to Visegrád, a remote agricultural region of the planet Reach, to investigate a disturbance in the communications relay responsible for the planet's communications to the rest of the UNSC, and the disappearance of the Army troopers sent in to investigate before them.[2] Sabotage by insurrectionists is suspected, but the cause of the disruption is revealed to be a Covenant advance infiltration force.[3]

Carter-A259 is shown from behind, looking over at the other Falcon.

Carter is shown from the front.

The camera shifts to behind the two Falcons.

Cut back to the second Falcon from Carter's point of view.

The two Falcons are once again shown from behind, from a greater distance. They are now approaching the outpost.

The Falcons bank left and hover over the outpost. Fade to black.

The two Falcons head in opposite directions as the Visegrád Comm Relay Hub comes into view.

The Falcon circles for a landing.

The Falcons land side by side, and Carter jumps down.

The player exits the Falcon along with Carter, Emile and Kat. Jun and Jorge remain in their Falcons to provide air support.

Six follows Noble Team down the hillside. Halfway down the hill, Emile climbs a rock and looks down to the outpost from the peak.

Emile leaps down from the rock, his shields draining from the impact. Carter and Kat take another route around the cliff.

Soon they come to a burning vehicle next to a small building. Emile begins inspecting a palette on the ground. He soon finds a small red cylinder-like device under some wooden debris.

Kat drops the beacon on the ground.

The team arrives at a house overlooking the cliffside.

The player moves through the house.

Six goes up a short flight of stairs and emerges on the other side of the house. The second Falcon lands in the courtyard long enough to drop Jorge off, then takes off. A door opens, and a civilian male steps out. Other civilians can be seen remaining inside.

Emile aims his shotgun at the man as he and Jorge question him, but he appears to speak only in Hungarian.

Jorge questions him in Hungarian. The civilian begins talking as Jorge translates.

A new waypoint appears on the building in question. The farmer gets back inside and the civilians close the door to barricade themselves back within for protection as Noble Team sprint east toward the building.

The group finds several human corpses, including two uniformed ones pinned to the wall.

Carter kneels down over the pools of blood and examines them. Avian-like footprints can be seen in the blood.

Carter stands back up and signals the team to keep moving. They enter an adjacent room with another dead body. Movement is suddenly heard on the roof, and a brief hostile contact is detected on the motion tracker.

(The contact is a Skirmisher and is up in the hills above the structure. It is possible to kill.)

Noble Team heads into a nearby building.

Noble Team moves to a set of windows, where they see the contacts: Grunts and Skirmishers. One of the Skirmishers sees Noble Team and begins squawking in alarm.

Some Skirmishers bolt towards the building, running into the basement level of the building.

Noble Team engages the Covenant forces. Nearby, Banshees begin to move in.

Noble Team clears out the Covenant near the farm, while the Falcon engages the Banshees. Soon, a Spirit is seen on approach.

Noble Team moves across the bridge, eliminating the Covenant forces.

Noble Team heads across the creek to engage three Ultra Elites, backed up by Unggoy, eventually defeating them.

Noble Six, Carter, and Jorge head to a flatbed truck, with Carter taking passenger seat and Jorge in back, using his gun as a support, while Noble Six drives. The Falcon carrying Jun lands long enough for Kat and Emile to climb on board before departing for Visegrád Relay.

Noble Six, Carter, and Jorge drive around, eliminating all Covenant they come across.

Noble Team reaches a Covenant landing site and get out of the truck.

Noble Team and 3 Charlie engage the Covenant, eventually clearing them out.

Two Falcons land. Travis and his team load into one to be evacuated, and Noble Team depart for the relay on the other Falcon. Carter, Jorge, and Noble Six are in the passenger seats, while Jun remains on the side seat where he had been providing overwatch earlier.

Noble Team reaches the relay, finding Covenant in the courtyard, pinning down Kat and Emile.

Noble Team engages the Covenant in the courtyard. Jun stays in the Falcon while Carter, Jorge, and Noble Six hop out to aid Kat and Emile.

Noble Team engage Covenant infantry, but more and more troops are dropped in via Spirit dropships.

If the player stalls.

Noble Team withdraws to the relay's entrance as the door closes, shutting the Covenant out.

Noble Six turns the corridor and sees a body.

If the player stalls.

Noble Six finds a data module on the body as Kat looks at the controls.

Jorge picks up a young female, but she continues hitting him while yelling in Hungarian.

Jorge puts down his weapon and grabs her by the arms.

Jorge stiffens in horror just as a Field Marshal jumps down, and Jorge barely avoids the Elite's Energy Sword while covering Sára. The Marshal growls a challenge at the rest of Noble Team and charges, while two more Zealots jump down.

The Marshal nearly cuts down Kat, but Carter pushes her out of the way. Noble Six has maintained constant fire during this, and the Elite's shield finally collapses, but he knocks Noble Six down as he runs out the door.

Another Zealot grabs Noble Six by the neck and extends an Energy Dagger, but Six punches him, stunning him momentarily. The Elite, unfazed, roars at Six, and prepares to stab them again. Carter kicks him off and Kat opens fire, draining the Zealot's shields. Carter then kicks an assault rifle to Six, who dives for it. The two Zealots head for another door, one holding the shouting Corporal as a human shield. Noble Team hold their fire. The civilian girl begins screaming while the Zealots head through the door, and the Corporal's screams are heard as he is killed, though he attempts one last struggle to escape, grabbing the side of the door and nearly pulling himself free before the Zealots drag him out of sight to be slaughtered.

Noble Six reloads, Jorge and Noble Six head into the room the Zealots retreated into, which Jorge then seals shut behind them.

Jorge throws a flare to the other side of the room, in an attempt to draw out hiding Covenant. One of the Zealots emerges from behind a crate, firing his Concussion Rifle at Jorge and Six, while Grunts and Jackals fire their weapons at Jorge. Jorge and Six clear the room, but the Zealot retreats down a nearby corridor. Jorge and Six follow suit.

Jorge taps the civilian girl's shoulder, but she shoves his hand off. Emile chuckles.

Jorge takes his helmet off.

Jorge looks at the body.

Jorge walks by Emile and glares at him, then helps Sára get on her feet.

Noble Team, sans Carter, leave the room, taking Sára with them. Jun heads out first, followed by Jorge with Sára, Emile, and then Noble Six. Kat follows after them, leaving Carter to speak with Holland alone. 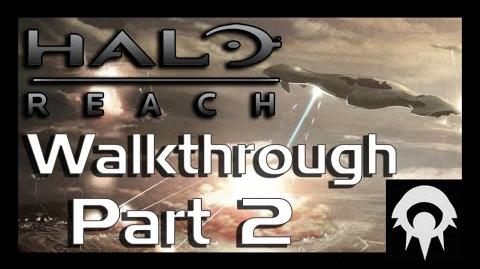 A post-game carnage report for the level play-tested by Bungie employees, with all applicable campaign Skulls activated.[1]

A flock of Moa.

Noble Team meeting a civilian suspected of being an insurgent.

Rain-soaked landscape on the level.

A Covenant Spirit dropship, with the communications array seen in the background.

Skirmishers near a homestead.

Noble Six, Jun, Jorge, and Carter in a Falcon in Winter Contingency

A Falcon preparing to deploy Noble Team into the facility.

The invincible Trooper on Winter Contigency

The first appearance of the Covenant on Reach. This Elite can be seen running from Noble Team as they touch down at the beginning of the mission