Wizard is a multiplayer map in Halo: Combat Evolved.[1] It is most likely a Human structure due to the Human metal plates that make up the internal part of the base. It is also possible that it is one of the Human camps that the survivors of the Pillar of Autumn built on Installation 04.

Wizard was remade as Warlock for Halo 2.

Wizard is a symmetrical map, in a circular shape. It is modeled visually after the interior of the Pillar of Autumn. There are two bases at opposite ends, a fair distance apart. Directly ahead of each base is a small platform, which contains the Needler and the Plasma Rifle. You can also get on the platform by climbing and ascending the ramp. Then, if you jump, there is a central platform which contains two Flamethrowers in the PC version. Each flag is protected by a slab of stone. To the right and left of the circular platform, there is an Active Camo, which is on the slab of stone, and an Overshield, which is behind the slab.

Next to each flag, right above the ladder, there is a health kit. Below each base and between the platform next to the base, there are four grenades, either Fragmentation Grenades or Plasma Grenades, depending on the base. This map is generally considered the smallest map in Halo: PC. 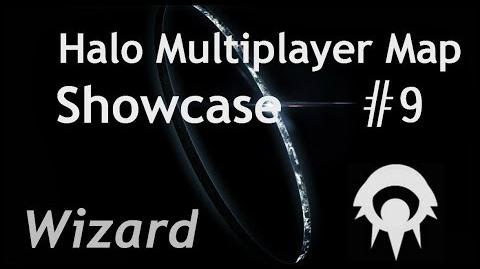 Retrieved from "https://halo.fandom.com/wiki/Wizard?oldid=1795038"
Community content is available under CC-BY-SA unless otherwise noted.