Forerunner structures with wreckage of UNSC and Covenant ships

Were you looking for the song from the Halo 4 soundtrack, Wreckage?

Wreckage allows players to "witness the chaos of a clash of civilizations, with its blend of claustrophobic spaces and dangerous exposures."[3] It is a ravaged environment of crashed debris where the surrounding destruction creates complex paths perfect for throwing off opponents or testing the limits of the Warthog. This devastated landscape provides plenty of cover with tons of nooks and crannies. 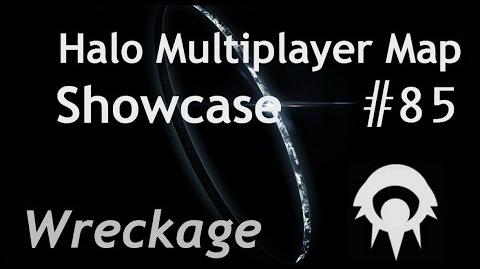 Player with FOTUS armor with a view of a Forerunner Line Installation the backdrop.

A interior view of the crashed UNSC ship, located near blue base.

The remains of a UNSC frigate.
Add a photo to this gallery

Retrieved from "https://halo.fandom.com/wiki/Wreckage?oldid=1795049"
Community content is available under CC-BY-SA unless otherwise noted.