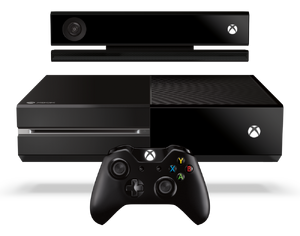 On June 10, 2013, during their E3 2013 press conference, Microsoft announced that a Day One Edition of the console would release along with the standard console on November 22, 2013. The Day One Edition would be priced the same as the regular console and would include a limited edition Xbox One controller, a token to unlock an exclusive achievement, a decal, and a premium packaging. This bundle also comes with exclusive DLC for the following games:

The following is a list of Halo products available on the Xbox One.

The Xbox One and Kinect 2.0

The Xbox One top-front view

The Xbox One Controller

A special edition Xbox One with Halo: The Master Chief Collection decals given away during San Diego Comic Con.
Add a photo to this gallery