Inside the Ardent Prayer

Zealot[2] is a multiplayer map in Halo: Reach. It is set on the Covenant ship Ardent Prayer, a Corvette.[3] It is made up of three levels. The ground level has two pockets on the sides and man cannons that send players up to the second floor in the middle room. The ground level also has a lift that takes players up to the third floor. The second floor has lifts that can bring people into the third floor, which is outside the ship. This section of the map is separated by a shield that players can go through, but projectiles can not. It is also exposed to the vacuum of space, in which sound effects are somewhat muffled.[4] Since there is very little gravity in this area, players can jump farther than inside the ship. There are two small platforms to the sides of the third level that can be used as a good camping spot. When using this, there is a soft kill area in outer space. 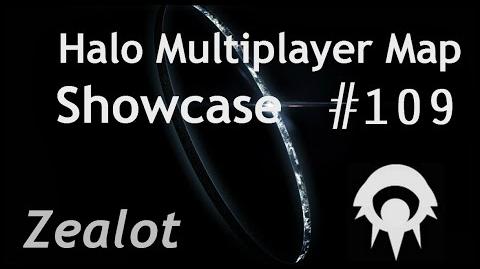 The level as seen in Carnàge Carnivàle.

The shields in which players can pass through to get to the third level in space.

The third level, which exposes you to space.

The outside of Zealot
Add a photo to this gallery

Retrieved from "https://halo.fandom.com/wiki/Zealot_(level)?oldid=1795139"
Community content is available under CC-BY-SA unless otherwise noted.